Class 9thNCERT English - Beehive11. If I Were You

‘A strange fellow with a strange plan’

Once upon a time, Gerrard, the playwright was alone in his cottage busy packing his bags for a relaxing holiday at the countryside. But to his amazement, an intruder silently entered his cottage armed with a revolver. Although his purpose to enter Gerrard’s cottage was unclear; Gerrard still managed to stay calm and cool in his presence as he was busy taking a call. On seeing the intruder, Gerrard was asked to sit still at one place. Then as their conversation progressed, the intruder revealed that he was a jewel thief. He further told him that he had killed a policeman and therefore the police was after him. In addition to this, he told him that due to his criminal record, he further wanted to kill Gerrard and take on his identity by which he could get away with the police and lead a normal life. However, Gerrard very cleverly concocted a story and told him that he too was a criminal and already had planned of running away. He also told the intruder that by killing him, he would be accused of double murder and as a proof, showed his traveling bag.

Further weaving the story, Gerrard told the intruder that his friend was standing on the nearby road, waiting for him and as soon as the police arrived, he would inform him. Now, in order to fully convince him, Gerrard took the intruder to the door to show the man. But as soon as they reached near the cupboard, Gerrard pushed him inside and immediately locked it from outside. Screaming and shouting, the intruder pleaded him to take him out of the cupboard but Gerrard very smartly took advantage of the situation and called the police and finally got the strange intruder arrested for his deeds.

How useful is this solution?We strive to provide quality solutions. Please rate us to serve you better.
PREVIOUSWhich of the words below describe Gerrard and which describe the Intruder?Write a paragraph each about Gerrard and the Intruder to show what qualities they have. (You can use some of the words given above.)NEXTImagine you are Gerrard. Tell your friend what happened when the intruder broke into your house.(Clues: Describe (i) the intruder - his appearance, the way he spoke, his plan, his movements etc., (ii) how you outwitted him)
Related Videos

How well you undertood tissues?44 mins

Which of the words below describe Gerrard and which describe the Intruder?

Write a paragraph each about Gerrard and the Intruder to show what qualities they have. (You can use some of the words given above.)

Enact the play in the class. Pay special attention to words given in italics before a dialogue. These words will tell you whether the dialogue has to be said in a happy, sarcastic or ironic tone and how the characters move and what they do as they speak. Read these carefully before you enact the play.

Look up the dictionary entries for the words sympathy, familiarity, comfort, care, and surprise. Use the information given in the dictionary and complete the table. 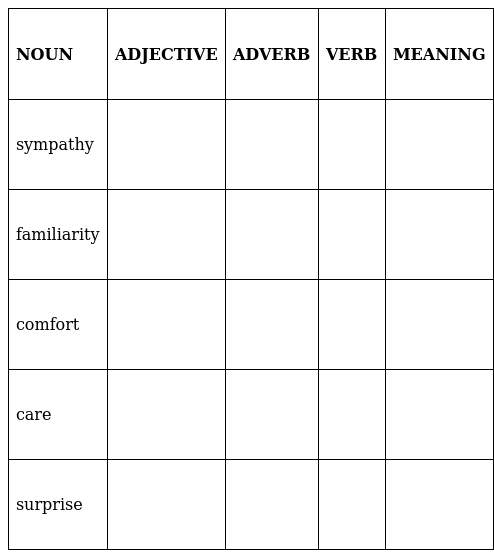 "This is your big surprise."

(i) Where has this been said in the play?

(ii) What is the surprise?

Consult your dictionary and choose the correct word from the pairs given in brackets.

(4) The fog had an adverse (affect/ effect) on the traffic.

(5) Cezanne, the famous French painter, was a brilliant (artist/ artiste).

(6) The book that you gave me yesterday is an extraordinary (collage/ college) of science fiction and mystery.

(7) Our school will (host/hoist) an exhibition on cruelty to animals and wildlife conservation.

(8) Screw the lid tightly onto the top of the bottle and (shake/shape) well before using the contents.

“A mystery I propose to explain." What is the mystery the speaker proposes to explain?

Irony is when we say one thing but mean another, usually the opposite of what we say. When someone makes a mistake and you say, "Oh! that was clever!" that is irony. You're saying "clever" to mean "not clever." 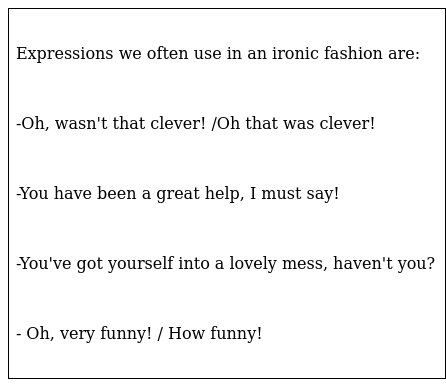 We use a slightly different tone of voice when we use these words ironically.

Read the play carefully and find words and expressions Gerrard uses in an ironic way. Then say what these expressions really mean. Two examples have been given below. Write down three more such expressions along with what they really mean. 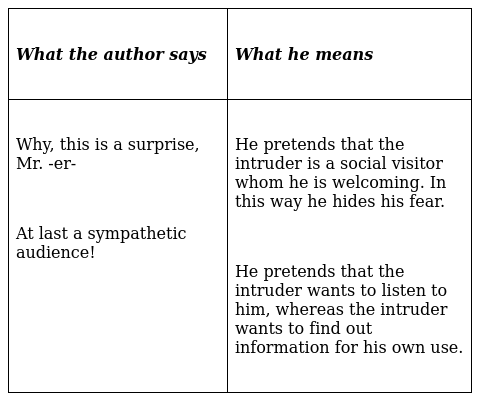 "At last a sympathetic audience."

(iii) Is he sarcastic or serious?

"I said it with bullets".

(iii) Is it the truth? What is the speaker's reason for saying this?