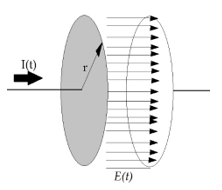 The capacitor is charging with the current I,

The Ampere’s circuital law is,

Also, the flux of electric field through the capacitor plates is,

As the charge on the capacitor plates is changing with time there will be a current i, given as,

Using the equation (a), we can write i as,

Substituting the value of i, we get,

is the magnetic field,

is the length element,

is the permeability of air

is the permittivity of air,

is the flux and IC is the conduction current (charging current). The above modified form of Ampere’s circuital law is known as the Ampere Maxwell’s law.