A. The minimum distance between the start and finish points of the motion of an object is called the displacement of the object.

As seen in the given figure,

The distance is not same as displacement. In fact, the displacement is the shortest distance between two given points.

B. Deceleration is negative acceleration.

The figure shows the velocity time graph of an object: 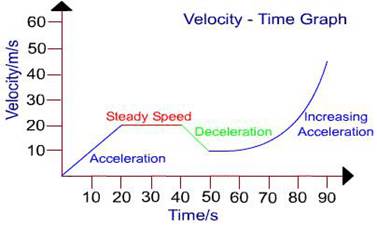 C. When an object is in uniform circular motion, its velocity changes at every point.

In uniform circular motion, the speed of the object is same. Since, it direction is changing at every instant, hence its velocity changes. Because, velocity is speed with direction.

The object in uniform circular motion is shown here: 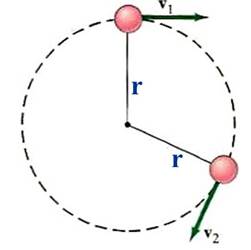 Here, the magnitude of both velocities is same.

During collision the total momentum, remains the same.

The figure shows two objects here before & after collision:

E. The working of a rocket depends on Newton’s third law of motion.

Explanation: According to Newton’s third law of motion, every action has an equal and opposite reaction.

In a rocket, the burnt fuel releases gases, which push the rocket upwards. The direction of forces is given in the figure below: How useful is this solution?We strive to provide quality solutions. Please rate us to serve you better.
PREVIOUSComplete the follNEXTGive scientific r
Related Videos

Find which of the