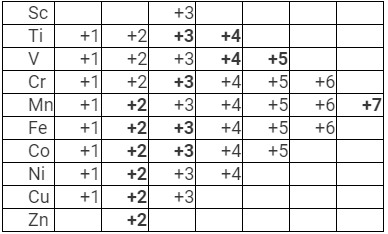 It can be observed from the above table that in the starting of 3d transition series elements like Sc, Ti, V, Cr in +2 state are not that stable in their elements in the +3 state.

In the middle Mn2+, Fe2+, Co2+are quite known. In fact, Mn2+ and Mn7+ are most stable states in Mn. Fe2+ is less stable when compared to Fe3+ which is due to fact that Fe3+ is able to loose one electron to acquire d5 state which has extra stability. Co2+ is less stable as compared to Co3+. Ni2+ is the most common and stable among its +2, +3, +4 states. Cu2+ is more stable and is quite common as compared to Cu+. Towards the end, Zn forms only Zn2+ which is highly stable as it has 3d10 state.

Note: As it becomes difficult to remove the third electron from d-orbital, the stability of +2 oxidation state increases from top to bottom.