Compare the east flowing and the west flowing rivers of the peninsular plateau. 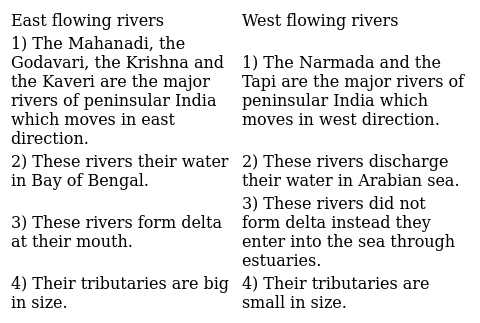 How useful is this solution?We strive to provide quality solutions. Please rate us to serve you better.
PREVIOUSDiscuss the significant difference between the Himalayan and the Peninsula rivers.NEXTWhy are rivers important for the country’s economy?
Related Videos

Solve the crossword puzzle with the help of given clues:

1. Nagarjuna Sagar is a river valley project, Name the river.

2. The longest river of India.

3. The river which originates from a place known as Beas Kund.

4. The river which rises in the Betul district of Madhya Pradesh and flows westwards.

5. The river which is known as the ‘Sorrow’ of west Bengal.

6. The river on which the reservoir for Indira Gandhi Canal has been built.

7. The river whose source lies near Rohtang Pass.

8. The longest river of peninsular India.

9. A tributary of Indus originating from Himachal Pradesh.

10. The river flowing through fault drains into the Arabian Sea.

11. A river of south India, which receives rain water both in summer and winter.

12. A river which flows through Laddakh, Gilgit and Pakistan.

13. An important river of the Indian Desert.

14. The river which joins Chenab in Pakistan.

15. A river which rises at Yammunotri glacier.

Discuss the significant difference between the Himalayan and the Peninsula rivers.

Compare the east flowing and the west flowing rivers of the peninsular plateau.

Why are rivers important for the country’s economy?