Collect information regarding the satellites sent by India for educational and communicational purposes. Make use of ICT for that.

India has been successfully launching satellites of many types since 1975. The organization responsible for India's space program is the Indian Space Research Organisation (ISRO). Satellites are is an artificial object which has been intentionally placed into orbit. It may be for communicative, educative or for monitoring.

The Ariane Passenger Payload Experiment (APPLE), was an experimental communication satellite launched by the Indian Space Research Organisation on June 19, 1981, by Ariane, a launch vehicle of the European Space Agency (ESA) from Centre Spatial Guyanais near Kourou in French Guiana.

APPLE was India's first experimental geostationary communication satellite. It was used in several communication experiments including relay of TV programmes and radio networking. It went out of service on September 19, 1983. 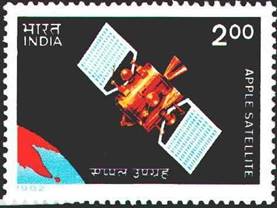 INSAT-1A was an Indian communications satellite which formed part of the Indian National Satellite System. It was launched in 1982 for a period of seven years. Following a series of failures, the satellite was abandoned in September 1983. It was the first operational multipurpose communication satellite.

INSAT-1B was an Indian communications satellite which formed part of the Indian National Satellite System. It was launched in 1983 for seven years. At the end of its seven-year design life, it was replaced by the newly launched INSAT-1D. In 1992, it was relocated before being decommissioned in August 1993.

INSAT-1C was the third in the first generation INSAT series of satellites built by Ford Aerospace to satisfy the domestic communication requirement of India. The Govt. agencies using its services were All India Radio, Doordarshan, Department of Space and Indian Meteorological Department.

INSAT-1C was launched from Guiana Space Centre in Kourou using Ariane 3 rocket on July 21, 1988. It was planned for a period of seven years, but it achieved only 1 year and 3 months.

INSAT-1D was 4th and the concluding multipurpose geostationary satellite of INSAT-1 series. It was launched on June 12, 1990.INSAT-1D was a joint venture of the Department of Space, Department of Telecommunications, Indian Meteorological Department and All India Radio. It was a success and was deactivated on 22 May 2002.

GSAT-1 was an experimental communications satellite launched aboard the maiden flight of the GSLV rocket. It was launched on 18 April 2001. The spacecraft was unable to complete its mission after a launch failure.

HAMSAT also known as HAMSAT INDIA, VU2SAT and VO-52 is a microsatellite providing amateur radio satellite communications services for Indian and international amateur radio operators. It was launched by PSLV-C6 on May 5, 2005, from Sriharikota. It was officially decommissioned after 9 Years and 2 Months but is still semi-operational providing unreliable service due to battery failure.

The Anna University Satellite (ANUSAT) was an Indian student research microsatellite designed, developed and integrated at Aerospace Engineering, Madras Institute of Technology. Students and faculties of Madras Institute of Technology and College of Engineering, Guindy were involved in the design of ANUSAT. It carries an amateur radio and technology demonstration experiments. The satellite's development was sponsored by the Indian Space Research Organisation.

It was successfully launched aboard PSLV-C12from the Satish Dhawan Space Centre. The launch was carried out on 20 April 2009 for 2 years. It was decommissioned in 2012. 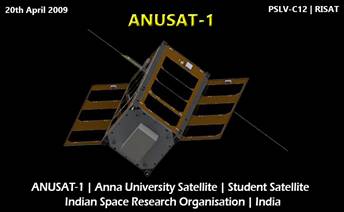 Swayam is a picosatellite (CubeSat) developed by the undergraduate students of College of Engineering, Pune under the guidance of Indian Space Research Organisation (ISRO) in January 2015. The structural design of the satellite, design of its electronic and control systems as well as the manufacturing of the satellite was carried out by the students. The project was completed over a span of 8 years.

The Satellite was launched by ISRO on 22 June 2016 from Satish Dhawan Space Center, Sriharikota, India.

The South Asia Satellite, also known as GSAT-9, is geostationary communication and meteorology satellite operated by the Indian Space Research Organisation for the South Asian Association for Regional Cooperation (SAARC) region. The satellite was launched on the 5th of May, 2017.

During the 18th SAARC summit held in Nepal in 2014, Indian Prime Minister Narendra Modi mooted the idea of a satellite serving the needs of SAARC member nations as a part of his neighborhood first policy. Afghanistan, Bangladesh, Bhutan, Maldives, Nepal, and Sri Lanka are the users of the multi-dimensional facilities provided by the satellite. Pakistan declined to participate in the project.

The South Asia Satellite provides crucial information on telemedicine, tele-education, banking, and television broadcasting opportunities. It is also equipped with remote sensing state of the art technology which enables the collection of real-time weather data and helps in observations of the geology of the South Asian nations.

These are some of the most important communicative satellites. Many other satellites apart from this were launched by India for integration in communication.

GSAT-3, also known as EDUSAT, was a communications satellite which was launched on 20 September 2004 by the Indian Space Research Organisation. EDUSAT is the first Indian satellite built exclusively to serve the educational sector. It is mainly intended to meet the demand for an interactive satellite-based distance education system for the country.

EDUSAT was successfully launched into from the Satish Dhawan Space Centre in Sriharikota. India's first broadband network on EDUSAT for schools - ViCTERS (Versatile ICT Enabled Resource for Students) was inaugurated by Dr. A.P.J Abdul Kalam, on 28 July 2005 in Thiruvananthapuram. It has revolutionized classrooms through an interactive IP-based technology called ‘[email protected] Project’. Kerala has since demonstrated how EDUSAT could be used to successfully empower teachers.

It was decommissioned in September 2010 and relocated to a graveyard orbit.

How useful is this solution?We strive to provide quality solutions. Please rate us to serve you better.
PREVIOUSIdentify the relation and match the columns making a chain
Related Videos

What types of communications can be done through mobiles?

National Highways near your area

Collect information regarding the satellites sent by India for educational and communicational purposes. Make use of ICT for that.

Identify the relation and match the columns making a chain 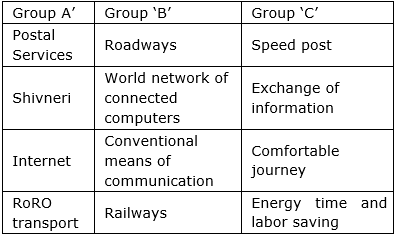 ‘Newspapers are used for communication'. Explain the statement

Conventional and modern means of communication.

If ∆ABC≅∆PQR AND ∆ABC is not congruent to ∆RPQ, then which of the following is not true?

Why does the lost child lose interest in the things that he had wanted earlier?

Show that if the diagonals of a quadrilateral bisect each other at right angles, then it is a rhombus.

What do you think happens in the end? Does the child finds his parents?

When does he realize that he has lost his way? How has his anxiety and insecurity been described?

Show that the diagonals of a square are equal and bisect each other at right angles.