Soaps are defined as the sodium salts of fatty acids Example:

whereas detergents are sodium salts of a long chain benzene sulphonic acids. Example:

The action of soap in removing an oily spot from a piece of cloth is as follows:

When a dirty cloth having oily spot is put in water containing dissolved soap, the oil is not dissolved in water. The soap molecules are salts of sodium and potassium of long chain carboxylic acid. The acid end of soap is hydrophilic i.e. water loving , and gets dissolved in water and the carbon chain dissolves in oil. Soap molecules forms micelles structure in which one end of the soap molecule is attached to the oil droplet and the other end towards the water. The formation of soap micelles thus removes oil particles from the surface and the surface is cleaned. 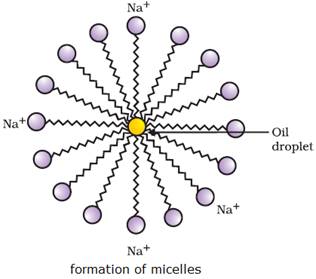 The two problems that arise due to the use of detergents instead. of soaps

1. These are non-biodegradable substances and can’t be broken into simpler substances by microorganisms. They remain as such in the environment.

2. They creates pollution in environment and also harmful when eaten by any animal.