(a) Three mirrors would be required by Boojho to see objects which he could not directly see. These mirrors would reflect the incident light successively so that the rays reach the position where the eye is being kept.

(b) The image indicating the position of the mirrors in the figure is as follows:

(c) He should place the mirrors at an angle of 45o with respect to the incident light so that the angle between the angle of incidence and angle of reflection is 90o and the ray of light is able to traverse the curvature of the apparatus which is at 90o and reaches the eye of the observer.

(d) The direction of rays in the figure is shown in the diagram shown below: - 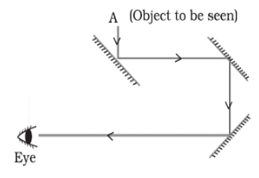 State one use of

A student makes a

A ray of light st

Explain how, a ha