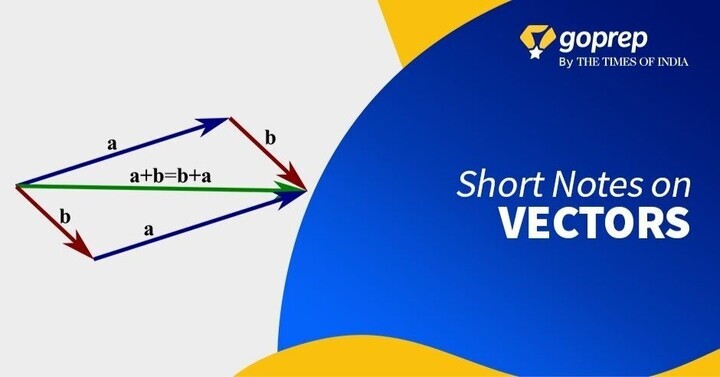 Vector is one of the fundamentals for the study in other areas of mathematics and of vital importance in physics. Thus, it becomes one of the most important topics in JEE Main, JEE Advanced and other engineering entrance examinations. Every year one can expect 4-5 questions from the topic along with some questions asked in coherence with other topics. Download the Vector short notes pdf from the link given at the end of the article.

Vectors are those quantities which are described by the magnitude of the quantity and its direction.

A set of vectors  is said to be linearly independent if

A set of vectors

is said to be linearly dependent if there exist scalars x1 , x2 , …, xn, not all zero such that

(i) Two vectors  and  are collinear ⇔  for some scalar λ.

and are collinear, if there exists scalars x, y, z such that  where x+y+z=0

Also the points A, B, C are collinear if for some scalar λ.

and are coplanar if scalars x, y, z, w not all zero simultaneously such that

5.1 Properties of the Scalar Product

make an acute angle with each other , an obtuse angle if  and are inclined at a right angle if .

(vi) If are three unit vectors along three mutually perpendicular lines, then

The vector product of two vectors

6.1 Properties of the Vector Product

(v) The vector perpendicular to both

(vi) The unit vector perpendicular to the plane of

(vii) If  three unit vectors are along three mutually perpendicular lines, then they follow the circular rule of cross product

are collinear and non-zero vectors then

(ix) (a) The area of a triangle if adjacent sides are

(b) The Area of a parallelogram if adjacent sides are

If be there vectors, there called the scalar triple product of these three vectors.

Note: The scalar triple product is usually written as   and termed as the box a,b,c

7.1 Properties of the scalar triple product

(iii) If λ is a scalar then

(v) The value of the scalar triple product, if two of its vectors are equal, is zero i.e.,

(xi) If then are coplanar

is the vector and

9. The scalar product of four vectors

This relation is known as Lagrange’s Identity.

An expression for any vector, in space, as a linear combination of three non-coplanar vectors

be three non-coplanar vectors, then the three vectors

11.1 Properties of Reciprocal system of Vectors

(v) The system of three mutually perpendicular unit vectors is its own reciprocal.

(1)  The bisectors of the angles between the lines

be the position vectors of ΔABC and

be the position vector of the centroid of ΔABC. Then

(4) The equation of a straight line

(i) Vector equation of the straight line passing through origin and parallel to  is given by where t is scalar.

(ii) Vector equation of the straight line passing through

and parallel to is given by where t is scalar.

(iii) Vector equation of the plane passing through

(5) Perpendicular distance of the line

(6) Perpendicular distance of the plane i.e.,  from the point P represented by vector a is

(7) The condition that two lines

and radius p is

(10)  Vector equation of sphere when extremities of diameter being