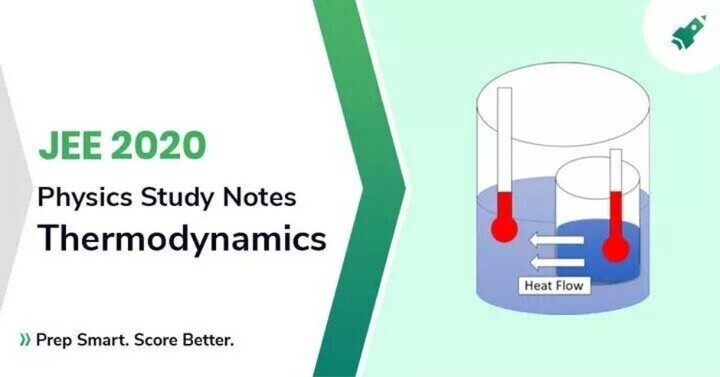 Heat and Thermodynamics is an important topic from JEE Main/ JEE Advanced Exam Point of view. Every year there are 1-3 questions asked from this topic. Some questions can be asked directly. This topic relates to our daily life, hence it is very easy to understand. This short notes on Heat and Thermodynamics will help you in revising the topic before the JEE Main & IIT JEE Advanced Exam.

You can also download Heat and Thermodynamics notes in the PDF format through the link shared at the end of this article.

Heat: Heat can be described as the transfer of energy between the objects, not the energy contained within the objects. Its SI unit is Joule (J). If heat absorbed by a system, then it is positive. But if heat is given out by a system then it is negative.

Temperature: Temperature is the measure of the degree of hotness and coldness of an object. On the macroscopic arena, the temperature is a physical property that governs the direction of heat flow between two objects placed in thermal contact. Heat always flows from the hotter object to the colder object. If no heat flow occurs, the two objects must have the same temperature.

Thermal Equilibrium:  Two bodies when contact in each other and there is no flow of heat takes place, the bodies are said to be in thermal equilibrium.

Open System: In open system exchange of both energy and matter is possible between the system and surroundings.

Closed System: In a closed system only, the exchange of energy is possible between the system and surroundings.

Isolated System: In the isolated system there is no exchange of energy nor mass between the system and surroundings.

Concept of Temperature:  Zeroth Law of thermodynamics states that the temperature is a physical quantity having the same value for all systems which are in thermal equilibrium with each other.

Heat and Work: When mechanical work is converted into heat, the ratio of work done (W) to heat produced (Q) always remains the same and constant.

Here J is the joule constant.

Internal Energy: Internal energy is the sum of the kinetic and the potential energies of the molecules in a system observed in a frame of reference in which the center of mass of the system is at rest. Kinetic energy is a state parameter and depends only on the state of the thermodynamic system at that instance.

Heat Capacity: Heat capacity is defined as the amount of heat required to raise the temperature of a substance tone degree.

Specific Heat capacity: Specific heat capacity is the amount of heat required to increase the temperature of a unit mass of the substance through one degree Celsius.

Molar Specific Heat: Molar specific heat is the amount of heat required to increase the temperature of one mole of the substance through one degree Celsius.

, where n is the number of moles.

Latent Heat: Latent heat is the amount of heat required to change the state of a unit mass of a substance at constant temperature and pressure.

Heat and Work:  Consider a gas container fitted with a movable piston. At equilibrium, the volume of the gas is V and it exerts a uniform pressure P on walls and on the piston. The piston has a cross-sectional area A, the force exerted by the gas on the piston is:

If the gas expansion undergoes a Quasi-static process i.e. it is slow enough so that the system remains in the thermal equilibrium.

The Work done by the gas is:

Under expansion: dV = +ve thus work done by the gas dW = -ve, and in compression both are negative.

First Law of Thermodynamics:  The heat energy supplied to the system increase the internal energy of the gas and the rest of the heat energy is converted into the work done by the system on the surroundings.

where dQ is the given heat, dU is the change in internal energy, and dW is the work done by the system.

For Example: Temperature pressure and Volume.

PV = nRT, where P is the pressure of the gas, T is the temperature of the gas, V is the volume of gas, n is the number of moles, and   is the universal gas constant.

1. Quasistatic process: A very slow process and the system is always maintained in the thermal equilibrium.

2. Reversible Process: A process that can be made to reverse its direction of flow by changing the physical conditions and it is considered that there is no dissipation if energy.

3. Cyclic process: Any process where a system returns to its initial state. The change in the internal energy of the system is dU = 0.

4. Isochoric Process: A process in which the Volume is constant throughout.

Equation of state becomes  and the work done in isochoric process is, W = PdV = P×0 = 0

5. Isobaric Process: A process in which the pressure is constant throughout.

Equation of state becomes  and the work done in isobaric process is,

6. Isothermal Process: A process in which the temperature is constant throughout.

Equation of state becomes  and the work done in isothermal process is,

7. Adiabatic Process: A process where there is no heat exchange takes place between the system and the surrounding.

8. Specific heat at Constant pressure: Amount of heat required to raise the temperature of one mole of gas by one degree of Celsius at constant pressure.

9. Specific heat at Constant Volume: Amount of heat required to raise the temperature of one mole of gas by one degree of Celsius at constant Volume.

For an Ideal Gas in Adiabatic process:

P-V diagram of the thermodynamic process:

Heat Engines: A heat engine is a device that converts heat energy into mechanical energy through a cyclic process.

Source or Hot Reservoir: It is a heat reservoir at higher temperature TH .Theoretically, it is supposed to have the infinite thermal capacity so that up to any amount of heat can be drawn from it without changing its temperature.

Sink or Cold Reservoir: It is a heat reservoir at a lower temperature TL . It has also infinite thermal capacity so that any amount of heat can be added to it without changing its temperature.

Heat Pump: Working part which performs mechanical work when the heat is supplied to it for any matter (solid, liquid and gas).

Working: In every cycle of operation, the Heat pump absorbs a certain amount of heat Q1 from the source at higher temperature TH, converts a part of this heat energy into mechanical work W and rejects the remaining heat Q2 to the sink at lower temperature environment. As the pump returns to its initial state after completing one cycle, there is no change in its internal energy.

Hence by the first law of thermodynamics, net heat absorbed in a cycle = Work done,

Efficiency of Heat Engine: The ratio of the net work done by the engine in one cycle to the amount of heat absorbed by the pump from the source.

NOTE: Efficiency of any heat engine is always less than unity.

Kelvin Planck Statement: It is not possible to design a heat engine working in a cyclic process and whose result is to take heat from a body at a single temperature and completely convert it into mechanical work.

Clausius Statement: It is not possible to design a refrigerator which works in a cyclic process and heat is transferred from a body to a higher temperature body.

Reversible and Irreversible Process: In a reversible process, the system can return to its initial conditions along the same path and every point along this path will be an equilibrium state.

A process that does not satisfy these requirements is irreversible.

Carnot Engine and its Efficiency

The Work in the Carnot Engine is carried through a reversible cycle of the following four steps:

Work done by ideal gas in this step is given by:

Carnot Efficiency:   Efficiency of a Carnot engine is,

Carnot Theorem: According to the Carnot Theorem, All Reversible engines operating between the same two temperatures have equal efficiency.

Refrigerator: A refrigerator works on the reverse principle of the Carnot heat engine.

It absorbs heat from the sink, the compressor in the refrigerator does the work and rejects the heat back to the source.

The coefficient of Performance: The ratio amount of heat removed to the mechanical work done on it in a cycle.