a) The increasing order of stability is X > W > S.

the relation between the relevant A and Z values are,

c) Binding energy is the minimum energy required to separate every particle from a system of particles. A nucleon inside a fairly large nucleus is under the influence of only some of its neighbors, which come within the range of the nuclear force as seen from the potential energy v/s separation diagram of two nucleons.

When the distance between two nucleons increases more than few femtometers, the nuclear force acting between them rapidly reduces to zero. This small range of distance is the reason of saturation of forces in a medium or a large-sized nucleus. The nuclear force will have no influence on the binding energy of the nucleon under consideration and the coulomb forces will increase the repulsion between the two.

If Atomic number increases by the addition of nucleons, they will not change the binding energy of a nucleon inside, since most of the nucleons in a large nucleus reside inside it and not on the surface, the change in binding energy per nucleon would be small. Thus, the binding energy for heavy nuclei are generally found to be low.

Protons, which are positively charged, held together inside a nucleus by the virtue of a special kind of force called the nuclear force which overcomes the repulsive electric force between the positively charged particles. The nuclear force is much stronger than the Coulomb force acting between charges or the gravitational forces between masses. The nuclear binding force dominates over the Coulomb repulsive force between protons inside the nucleus

The variation of potential energy of a pair of nucleons as a function of their separation is as shown in the diagram. 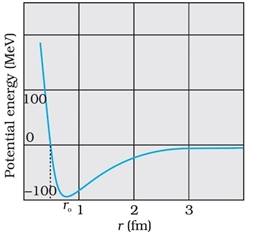 When the distance between two nucleons increases more than 2 femtometers, the nuclear force acting between them rapidly reduces to zero. This small range of distance is the reason of saturation of forces in a medium or a large-sized nucleus. This leads in steadiness in the binding energy per nucleon.

The potential energy is at its minimum at a distance of about 0.8 femtometers between the nucleons which indicates that the force is attractive for distances larger than 0.8 fm. Nuclear force becomes repulsive if the distance becomes less than 0.8 fm. The nuclear force acting in neutron-neutron, proton-neutron and proton-proton interaction is approximately the same as it does not depend on the electric charge of the nucleon.

A nuclide 1 is sa

The mass of a H-a