Poetry-3. At A Potato Digging

Below are images of possible disasters that can completely change one's life, unless one happens to be one of the lucky survivors. Discuss how. 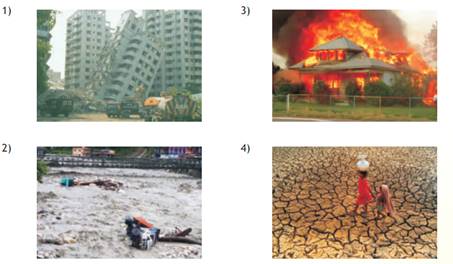 1) The first picture shows the damage that occurs after an earthquake. Full-fledged earthquakes wreck homes and cause a large number of casualties, and therefore all those who are affected by them often end up losing their dear ones and property and have a very different perspective to life after the event.

2) The second picture shows a house fire. In this deadly situation, people and material possessions often do not survive. Many receive scars and burns that remind them of the dreadful event long after it is over, and many become psychologically crippled as a result of such a calamity.

3) The third picture shows a flood. Flooding causes a lot of damage to the lives, crops and property of people, leaving them helpless and dependent. The period after the flood is also very dangerous, as that is when there is the greatest danger of the spread of diseases.

4) The fourth picture shows a drought. The failure of rain usually brings along famine, which is the failure of food crops. This situation is extremely painful as it affects every person in such a region, and the lack of food and water is devastating.

How useful is this solution?We strive to provide quality solutions. Please rate us to serve you better.
NEXTAnswer by choosing the best option.The poem is about
Related Videos