4. Structure of The Atom

Atomic models have been improved over the years. Arrange the following atomic models in the order of their chronological order

J.J. Thomson identified in his experiment that the atom was not a simple, indivisible particle but contained at least one subatomic particle called electron. Rutherford put forward the model of an atom which had a positively charged centre called nucleus. It also had the electrons which revolved around the nucleus in well-defined orbits. According to Bohr’s model of an atom, only certain or special orbits of electrons were allowed in an atom. During revolving around these orbits, the electrons do not radiate energy.

How useful is this solution?We strive to provide quality solutions. Please rate us to serve you better.
PREVIOUSWhich of the following statement is always correct?NEXTIs it possible for the atom of an element to have one electron, one proton and no neutron. If so, name the element.
Related Videos

Draw a sketch of Bohr’s model of an atom with four shells.

What do you understand by the term ‘discrete orbit’?

(a) List any two postulates of Bohr’s model of an atom.

What are the postulates of Bohr’s model of an atom?

Atomic models have been improved over the years. Arrange the following atomic models in the order of their chronological order

Which of the following in Fig. 4.2 do not represent Bohr’s model of an atom correctly?

(i) Draw the atomic structures of the following elements: Magnesium, silicon, sulphur.

(ii) What is the atomic number and mass number of the element whose atomic structure is shown in below? 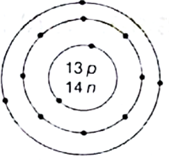