3. Interior of the Earth

Answer the following questions in about 150 words.

(i) What are the effects of propagation of earthquake waves on the rock mass through which they travel? 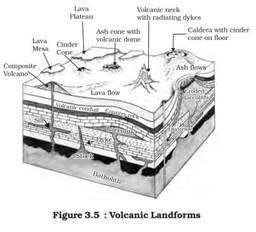 (i) An earthquake occurs with the release of energy along a fault, and the rocks along a fault tend to move in opposite directions carrying the released energy through them in the form of waves. Earthquake waves are of two types – body waves and surface waves.

Body waves are generated due to the release of energy at the focus and move in all directions travelling through the body of the earth. The two types of body waves – P and S waves – varies in their mode of propagation (longitudinal for P waves and transverse for S waves) and differs in the medium through which they can travel. The velocity of waves changes as the travel through materials with different densities – the denser the material, the higher is the velocity. Their direction also changes as they reflect or refract when coming across materials with different densities. This has helped scientists to understand the structure of the interior of the earth.

Surface waves are generated when the body waves interact with the surface rocks. These waves move along the surface and are the last to report on seismograph. They cause displacement of rocks, and hence, the collapse of structures occurs.

Some major intrusive forms are:

These are the cooled portion of the magma chambers. They develop in the form of large domes, and appear on the surface only after the denudational processes remove the overlying materials. They cover large areas, and at times, assume depts that may be several kilometres.

These are large dome-shaped intrusive bodies with a level base and connected by a pipe-like conduit from below.

When lava moves upwards, a potion of the same may tend to move in a horizontal direction wherever it finds a weak plane. It may get rested in different forms.

In case it develops into a saucer shape, concave to the sky, it is called lapolith.

At times it is found at the base of synclines or at the top of anticline in folded igneous country, such wavy materials have a definite conduit to source beneath in the form of magma chamber. These are called the phacoliths.

The near horizontal bodies of the intrusive igneous rocks are called sill or sheet, depending on the thickness of the material.

When the lava makes its way through cracks and the fissures develop in the land. It solidifies almost perpendicular to the ground. It gets cooled in the same position to develop a wall-like structure called dykes.

How useful is this solution?We strive to provide quality solutions. Please rate us to serve you better.
PREVIOUSAnswer the following questions in about 30 words.(i) What are body waves?(ii) Name the direct sources of information about the interior of the earth.(iii) Why do earthquake waves develop shadow zone?(iv) Briefly explain the indirect sources of information of the interior of the earth other than those of seismic activity.
POPULAR QUESTIONS :
Q

Which of the following relations are functions? Give reasons. If it is a function, determine its domain and range.