8. Composition and Structure of Atmosphere

(i) The atmosphere is a mixture of gases, dust particles and water vapour. The following table illustrates the percentage composition of the gases

Gases like nitrogen and oxygen cover the maximum portion of the gases and other are covered by dust particles like smoke, pollen ash, soot etc. and water vapour. The density of gases decreases with increase in height. At above 120km, the oxygen density becomes negligible whereas carbon dioxide and water vapour remains upto 90 km from the surface of the earth. Among the gases the percentage of carbon dioxide is increasing day by day. Carbon dioxide is a greenhouse gas that allows ultraviolet rays to reach the earth and prevent the extra terrestrial rays from escaping. The water vapour absorbs the part of the insolation from the sun and prevents the earth’s radiated heat. It acts like a blanket allowing the earth neither to be too cold nor too hot. 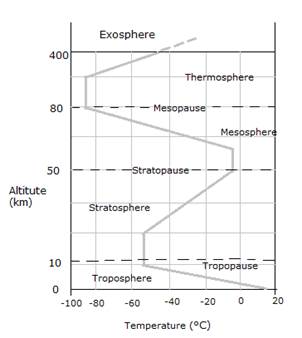 The atmosphere has a multilayered structure consisting of the following layers: Troposphere, Stratosphere, Mesosphere, Ionosphere, and Exosphere.

• Troposphere- The word troposphere is derived from the Greek word ‘tropos’ and it means turbulence and mixing. Most of the weather phenomena take place in this layer. This troposphere contains almost all the water vapour and most of the dust particles. Temperature decreases with height at an average rate of 1°C per 167 m of height above the sea level.

• Tropopause- The upper limit of the atmosphere is called the tropopause. The temperature stops decreasing at this level. It may be as low as -35°C

• Stratosphere- Above the troposphere lies the stratosphere which extends up to 50km above the surface of the earth. The stratosphere is free from water vapour and dust particles. There are no clouds or turbulence in the air. The temperature increases due to absorption of heat of the ultraviolet rays of the sun by Ozone present in this layer. It absorbs the harmful ultraviolet rays from the sun which would severely harm all the living beings on Earth.

• Mesosphere- The Mesosphere is the layer which extends to a height of 80 km above the stratosphere. It has he coldest temperature in the atmosphere. The temperature is around -100°C.

• Thermosphere- The ionosphere, also known as the Thermosphere extends from 80 km to 480 km. Amazingly, temperature in this layer rises to a very high degree, i.e. 1480°C sue to molecules in this layer absorbing the Sun’s deadly x-rays and its shot wave ultraviolet radiation of x-rays and gamma rays.

• Exosphere- The topmost layer of the atmosphere is called the exosphere. The atmosphere is in a rarefied form and pressure is extremely low. Temperature increases with height in this layer. The lack of gravity in exosphere allows traces of gas molecules such as oxygen, nitrogen, argon, and helium to be present.

If X and Y