(i) When a concentrated solution of sodium chloride is electrolyzed, it forms sodium hydroxide (NaOH), chlorine gas and hydrogen gas.


The reaction takes place is given as:


The above reaction is called chlor-alkali process. 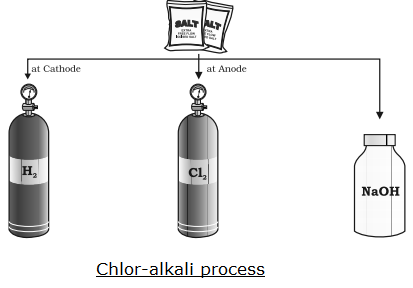 (ii) The electrolysis of a concentrated solution of sodium chloride known as chlor-alkali process because of the products formed:


a. The products formed in this reaction are NaOH (a strong base/alkali), chlorine and hydrogen gas.


b. “Chlor” means chlorine and “alkali” means base i.e. NaOH.


(iii) The three products of thee chlor-alkali process are:


a. It is mostly used in soaps and detergents.


b. It is also used to make papers and artificial fibers.


a. It is mostly used in medicines and in fuels.


b. It is used with ammonia for fertilizers.


a. It is used in treatment of water in swimming pools.


b. It is used as disinfectants and pesticides.

How useful is this solution?We strive to provide quality solutions. Please rate us to serve you better.
PREVIOUSGive reasons:NEXTState in brief th
Related Videos

Explain why is hy