A. You can shield a charge from electrical forces by putting it inside a hollow conductor.

Can you shield a body from the gravitational influence of nearby matter by putting it inside a hollow sphere or by some other means?

C. If you compare the gravitational force on the earth due to the sun to that due to the moon, you would find that the Sun’s pull is greater than the moon’s pull. (you can check this yourself using the data available in the succeeding exercises).

Charges are shielded from electrostatic forces by keeping them inside hollow conductor as no electric field penetrates the conductor and both gravitational forces and electric forces are field forces i.e. A body or charge experience force due to other body because of interaction between its own field and field due to other body or charge. We does not allow external field to interact with field of charge so it does not experience any force but there is no method to shield a body from gravity because gravity is independent of medium and there is no material found which shields gravitational field or does not allow it to pass through it so external gravitational field interacts with gravitational field of body and hence body experience force.

If the spaceship is large enough then the astronaut will definitely detect the Earth’s gravity as Gravitational Force on spaceship is directly proportional to the mass of spaceship so as mass of bigger spaceship will be large and hence if will experience noticeable amount of force which can be detected, we know gravitational force on a body is given as

Where, F is gravitational force

m2 is the mass of second body which is spaceship

and r is distance between earth and spaceship

(c). As we know Gravitational force is inversely proportional to the square of the distance

Where FG is gravitational force and r is the distance

Where G is universal gravitational Constant

and r is distance between earth and spaceship

But in case of Tidal Pull it is observed that it is inversely proportional to cube of distance i.e.

So here as the distance increases tidal pull decreases by a huge amount and hence since sun is very far away as compared to moon tidal effect of moon’s Pull is greater.

Assuming the earth to be a sphere of uniform mass density, how much would a body weigh half way down to the center of the earth if it weighed 250 N on the surface?

In the following two exercises, choose the correct answer from among the given ones:

The gravitational intensity at the center of a hemispherical shell of uniform mass density has the direction indicated by the arrow (see Fig 8.12) 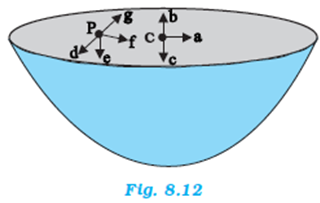 For the above problem, the direction of the gravitational intensity at an arbitrary point P is indicated by the arrow (i) d, (ii) e, (iii) f, (iv) g.

A body weighs 63 N on the surface of the earth. What is the gravitational force on it due to the earth at a height equal to half the radius of the earth?

A pendulum having a bob of mass m is happening in a ship sailing along the equator from east to west. When the ship is stationary with respect to water the tension in the string is T0.

(a) Find the speed of the ship due to rotation of the earth about its axis.

(b) Find the difference between T0 and the earth’s attraction on the bob.

(c) If the ship sails at speed

. what is the tension in the string? Angular speed of earth’s rotation is ω and radius of the earth is R.

Is it possible for a body to have inertia but no weight?

At what rate should the earth rotate so that the apparent g at the equator becomes zero? What will be the length of the day in this situation?

The collection of all natural numbers less than 100.

In each of the following, determine whether the statement is true or false. If it is true, prove it. If it is false, give an example:

The collection of all boys in your class.