Answer question numbers 3(a) - 3(d) on the basis of your understanding of the following paragraph and the related studied concepts.

Renewable energy sources such as wind energy are vital for the Indian economy, not only from the point of view of supply, but also from the perspective of environmental and social benefits.

windmill facilities in India are installed in Tamil Nadu. Muppandal is a small village of Tamil Nadu and one of the most important sites of wind-farm in the state.

It uses wind from the Arabian Sea to produce renewable energy. The suitability of Muppandal as a site for wind farms stems from its geographical location as it has access to the seasonal monsoon winds.

The electrical generators used on wind turbines in sites like Muppandal, produce an output AC of 240 V and a frequency of 50 Hz even when the wind speed is fluctuating. A transformer may be required to increase or decrease the voltage so it is compatible with

the end usage, distribution or transmission voltage, depending on the type of interconnection.

(a) State the principle behind electric generator.

(b) The output frequency of wind turbine is 50 Hz. What is meant by this statement?

(c) Why do you think Muppandal is at an advantageous position for this project?

(d) Based on the data represented in the graph below, which of the two cities A or B would be an ideal location for establishing a wind-farm and why? 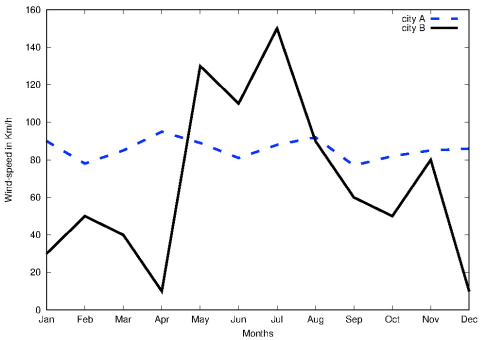 (a) Generators generate electrical power based on the principle of Faraday's law of electromagnetic induction.

This law states that-

(c) Muppandal in Tamil Nadu has access to Monsoon winds which is a good source to drive wind turbines, and hence its suitable for this project.

(d) Here city B has maximum wind speed up to 140Km/H, but it’s of highly fluctuating in nature.

On the other hand, the fluctuation in wind speed of city A is less, the average is maintained near 100Km/H

Hence, city A is suitable for this project.

How useful is this solution?We strive to provide quality solutions. Please rate us to serve you better.
PREVIOUSHow does valency of an element vary across a period?NEXTQuestion numbers 4(a) - 4(d) are based on the two tables given below. Study these tables related to blood sugar levels and answer the questions that follow.(a) Refer to Table B showing the blood report of the levels of glucose of patients X and Y. Infer the disease which can be diagnosed from the given data.(b) Identify the hormone whose level in the blood is responsible for the above disease.(c) Which one of the following diets would you recommended to the affected patient?i) High sugar and low fat diet.ii) Low sugar and high protein diet.iii) High Fat and low fiber diet.iv) Low sugar and high fiber diet.(d) Refer to the Table A and suggest the value of the mean blood glucose level beyond which doctor’s advice is necessary:i) 180 mg/dLii) 115 mg/dLiii) 50 mg/dLiv) 80 mg/dL
RELATED QUESTIONS :

What are the limitations in obtaining energy from wind?

The power generated in a windmill

What should be the minimum wind speed for the satisfactory working of a wind- powered electric generator?

Minimum velocity of wind required for a functional windmill is about:

What is the minimum wind velocity required to obtain useful energy with a windmill?

Would you agree that the “depths of oppression” create “heights of character”? How does Mandela illustrate this? Can you add your own examples to this argument?