The person cannot see nearby objects and is able to see far objects clearly, so he is suffering from Myopia also called near sightedness also his least point of distinct vision is far than that of normal eye. To correct this type of defect concave lens or diverging lens are needed because image is formed in front of retina rather than on retina.

i. The ray diagram for the defect of vision of the eye is 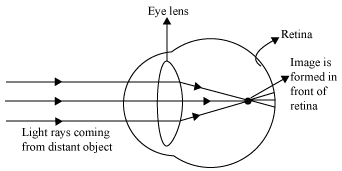 The image is formed in front of retina.


ii. The ray diagram for correction of defect of vision is

By correction, the image is formed on the retina, for correction we use concave lens or diverging lens.

How useful is this solution?We strive to provide quality solutions. Please rate us to serve you better.
PREVIOUSThe far point of NEXTa.Write the funct
Related Videos