• Among B and C former is an aldehyde(responds to Felling’s test) and latter is obviously a ketone as both forms iodoforms on treatment with I2 and NaOH. And from this clue, we can identify the alkene ‘A’ (Mol. formula C5H10) which is 2 Methyl but-2-ene also as ozonolysis does not disrupt the symmetry of the molecule.

• The equation for ozonolysis of alkene
A :

• Now, for compound ‘B’ (acetaldehyde) the iodoform reaction is as follows : 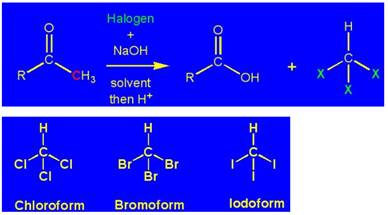 • It also gives Felling’s test which is the way to identify it as an aldehyde :

• Compound ‘C’ which is a ketone (acetone) the iodoform reaction is as follows:

But it is unable to give Fehling’s test.