Combining the inferences drawn above, the structure of ‘A’ can be represented as:

Ozonolysis of ‘A’ takes place in the following manner:- 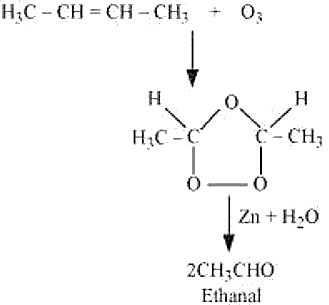 The final product is ethanal with molecular mass 44u.

How useful is this solution?We strive to provide quality solutions. Please rate us to serve you better.
PREVIOUSAn alkene ‘A’ on ozonolysis gives a mixture of ethanal and pentan-3- one. Write structure and IUPAC name of ‘A’.NEXTPropanal and pentane-3-one are the ozonolysis products of an alkene?What is the structural formula of the alkene?
Try our Mini CourseMaster Important Topics in 7 DaysLearn from IITians, NITians, Doctors & Academic Experts
Dedicated counsellor for each student
24X7 Doubt Resolution
Daily Report Card
Detailed Performance Evaluation
view all courses