An aeroplane is moving with a velocity u. It drops a packet from height h. The time t taken by the packet in reaching the ground will be?

Velocity of aeroplane = u

Height above the ground = h

Let, time taken by the packet to reach the ground = T

How useful is this solution?We strive to provide quality solutions. Please rate us to serve you better.
PREVIOUSA projectile has the same range R when the maximum height attained by it either H1 or H2. Find relationship between R, H1 and H2.NEXTTwo forces 5 kg wt. and 10 kg wt. are acting with an inclination of 120° between them. What is the angle which the resultant makes with 10kg wt.?
Related Videos

A particle is projected in air at an angle β to a surface which itself is inclined at an angle α to the horizontal (Fig. 4.6).

(a) Find an expression of range on the plane surface (distance on the plane from the point of projection at which particle will hit the surface).

(c) β at which range will be maximum.

(Hint: This problem can be solved in two different ways:

(i) Point P at which particle hits the plane can be seen as intersection of its trajectory (parabola) and straight line. Remember particle is projected at an angle (α + β) w.r.t. horizontal.

A particle falling vertically from a height hits a plane surface inclined to horizontal at an angle θ with speed vo and rebounds elastically (Fig 4.7). Find the distance along the plane where it will hit second time. 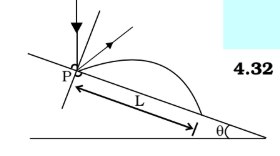 (Hint: (i) After rebound, particle still has speed Vo to start.

(ii) Work out angle particle speed has with horizontal after it rebounds.

(iii) Rest is similar to if particle is projected up the incline.)