• The main reason behind the basic properties of cyclopentyl amine

is the availability of unshared electrons on the nitrogen atoms which allows the ease of protonation on the N atom and forming of cation by interacting with acids.

• And also the cyclopentyl ring makes the N more nucleophilic (electron-donating tendency, through the effect of hyperconjugation) it has more basic strength even more than ammonia.

might be weakest base among them due to conjugation of the –NH2 group with the benzene ring which eventually makes the lone pair on N atoms less available, which is also partially the case for (iii)

How useful is this solution?We strive to provide quality solutions. Please rate us to serve you better.
PREVIOUSWhich of the following compounds is the weakest Brönsted base?(i)(ii)(iii)(iv)NEXTThe correct decreasing order of basic strength of the following species is _______.H2O, NH3, OH–, NH2–
Related Videos 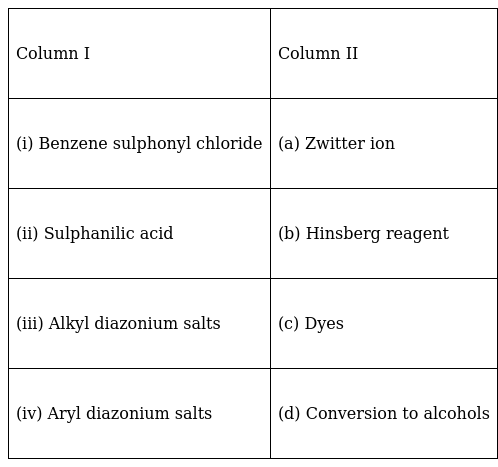 Predict the reagent or the product in the following reaction sequence. 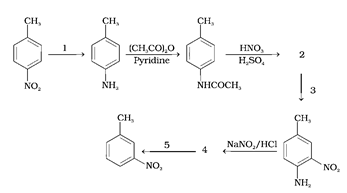 A colourless substance ‘A’ (C6H7N) is sparingly soluble in water and gives a water soluble compound ‘B’ on treating with mineral acid. On reacting with CHCl3 and alcoholic potash ‘A’ produces an obnoxious smell due to the formation of compound ‘C’. Reaction of ‘A’ with benzenesulphonyl chloride gives compound ‘D’ which is soluble in alkali. With NaNO2 and HCl, ‘A’ forms compound ‘E’ which reacts with phenol in alkaline medium to give an orange dye ‘F’. Identify compounds ‘A’ to ‘F’.

Which of the following reactions belong to electrophilic aromatic substitution?

Why is NH2 group of aniline acetylated before carrying out nitration?

The reagents that can be used to convert benzenediazonium chloride to benzene are __________.

Among the following amines, the strongest Brönsted base is __________.

What is the product when C6H5CH2NH2 reacts with HNO2?