Among NH3, H2O and HF, which would you expect to have highest magnitude of hydrogen bonding and why?

1. Hydrogen fluoride molecule has only straight chain of bonding whereas on the other hand water molecule which consists of two hydrogen and one oxygen atom forms a huge ring like structure.2. The hydrogen bonding in ammonia is limited because nitrogen atom possess only one lone pair of electrons. Hence, H2O has the strongest hydrogen bonded structure.

6. In case of ammonia, the extent of hydrogen bonding is limited because nitrogen has only one lone pair. Therefore, it cannot satisfy all hydrogens. 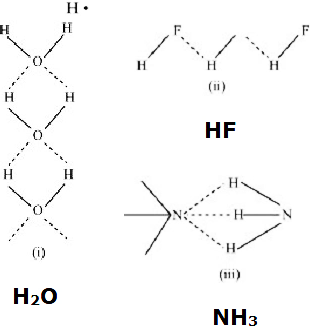 How useful is this solution?We strive to provide quality solutions. Please rate us to serve you better.
PREVIOUSHow does the atomic hydrogen or oxy-hydrogen torch function for cutting and welding purposes? Explain.NEXTSaline hydrides are known to react with water violently producing fire. Can CO2, a well-known fire extinguisher, be used in this case? Explain.
Related Videos

Hydrogen Spectrum? Know about it all54 mins

Prepare a questionnaire to find out the actual problems faced by an owner of a small scale unit. Prepare a project report on it.

In each of the, find the equation of the parabola that satisfies the given conditions:

Find the mean deviation about median for the following data:

What will Rs 500 amounts to in 10 years after its deposit in a bank which pays annual interest rate of 10% compounded annually?

The number of bacteria in a certain culture doubles every hour. If there were 30 bacteria present in the culture originally, how many bacteria will be present at the end of 2nd hour, 4th hour and nth hour?