However, in the case of molecules containing more than two atoms, the dipole moment not only depends upon the individual dipole moments but also on the spatial arrangement of various bonds in the molecule. 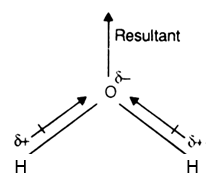