An arrangement in which resistors are connected between two common ends of the circuit in such a way that the potential difference across each resistance is equal to the applied voltage, then such an arrangement is called the parallel combination

As shown in the figure, two resistances R1 and R2 are connected between two points A and B  in the parallel combination.

Let the potential applied by the dc source to this combination be V. let I1 and I2 be the current measured by ammeters, connected in series with the resistor R1 and R2 respectively, then

If Rp, is the equivalent resistance of the given parallel combination having the same potential difference a the applied potential, then 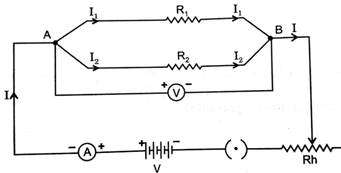 Connect all the resistors in parallel combination between the two terminals of the voltmeter as shown in the figure given below. 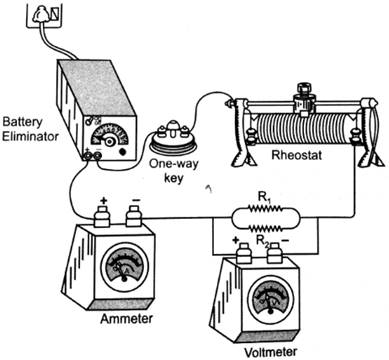 1. Connect the circuit as shown in the circuit diagram with one of the unknown resistors.

3. Connect the given resistors in parallel combination between the two terminals of the voltmeter as shown in the circuit diagram above.

4. Plug in the key and take the readings of ammeter and voltmeter.

5. Repeat the step 5 for three times by changing the position of the sliding contact of the rheostat.

6. Record the readings in the observation table and find the ratio of V and I. It will give the equivalent resistance of the combination. The image of the ammeter is attached here: The number of divisions in between two consecutive values = 10

2. There is a direct agreement between the calculated value and the experimental value.

1. All the connection should be tight and properly done as per circuit diagram.

2. Take out the plug from the plug key in between the two observations.

3. A low resistance rheostat should be used in the circuit to obtain large variation in current.

4. A thick copper connecting wires should be used in the circuit.

How useful is this solution?We strive to provide quality solutions. Please rate us to serve you better.
PREVIOUSAIM<spNEXTWhat is zero erro
Related Videos

In a series combi

What is the equiv

You are given thr

Why are copper an