Addition of HBr to propene yields 2-bromopropane, while in the presence of benzoyl peroxide, the same reaction yields 1-bromopropane. Explain and give mechanism.

Addition of HBr to propene occurs through an electrophilic substitution reaction mechanism.

This occurs via the following steps : -

Hydrogen bromide provides an electrophile, H+. This electrophile attacks the double bond to form 1° and 2° carbocations as shown below:- 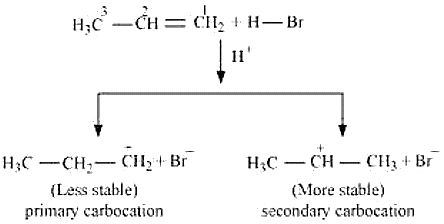 Step – 2: Secondary carbocations are more stable than primary carbocations. Hence, the former predominates since it will form at a faster rate. Thus, in the next step, Br– attacks the carbocation to form 2 – bromopropane as the major product.

This reaction follows Markovnikov’s rule where the negative part of the addendum is attached to the carbon atom having a lesser number of hydrogen atoms.

In the presence of benzoyl peroxide, an addition reaction takes place anti to Markovnikov’s rule. The reaction follows a free radical chain mechanism as: 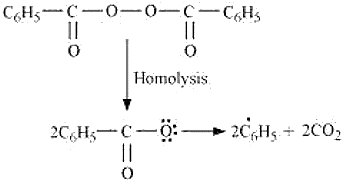 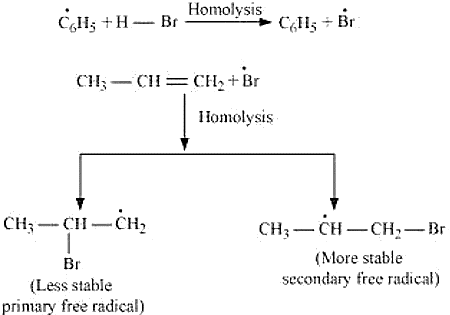 Now, secondary free radicals are more stable than primary radicals. Hence, the former predominates since it forms at a faster rate. Thus, 1 – bromopropane is obtained as the major product.

How useful is this solution?We strive to provide quality solutions. Please rate us to serve you better.
PREVIOUSWhat effect does branching of an alkane chain has on its boiling point?NEXTWrite down the products of ozonolysis of 1,2-dimethylbenzene (o-xylene).How does the result support Kekulé structure for benzene?
Try our Mini CourseMaster Important Topics in 7 DaysLearn from IITians, NITians, Doctors & Academic Experts
Dedicated counsellor for each student
24X7 Doubt Resolution
Daily Report Card
Detailed Performance Evaluation
view all courses