a) Step 1: When CH3CN is treated with SnCl2 (stannous chloride) in the

presence of HCl, it gives CH3CHO (A)

The above reaction is called Stephen reaction.

Step 2: When CH3CHO is treated with HCN, it gives cyanohydrin.

Step 3: When CH3CHO (A) is treated with dil. NaOH, it undergoes aldol condensation to form β-hydroxyacetaldehyde (B).

⇒ The enolate ion being a strong nucleophile attacks the carbonyl group of the second molecule of acetaldehyde (CH3CHO) to anion.

⇒ Protonation of anion to form a β-hydroxy aldehyde (aldol)

Step 4: Now, when aldol(B) is heated with dilute acids undergo dehydration to from But-2-en-1-al(C).

Thus, A is CH3CHO

(ii) CH3—CH2—COOH and HCOOH can be distinguished by the following test:

⇒ Tollen’s reagent test: Formic acid contains a H-atom attached to >C=O group and hence can be regarded as an aldehyde.

⇒ It can be easily oxidized to CO2 and H2O but acetic acid cannot. Therefore, HCOOH (formic acid) behaves as a reducing agent whereas CH3—CH2—COOH (ethanoic acid) does not.

Formic acid reduces Tollen’s Reagent to metallic silver but ethanoic acid does not.

Tollens’ reagent is an ammoniacal solution of silver nitrate and is prepared by adding NH4OH solution to AgNO3 solution till the precipitate of Ag2O first formed just redissolves. When propanal (aldehyde) is heated with Tollens’ reagent, the latter is reduced to metallic silver which deposits on the walls of the test tube as bright silver mirror.

During this reduction, the following reaction occur:

The silver (Ag) thus deposited shines like a mirror. The formation of silver mirror confirms the presence of propanal.

On the other hand, CH3—CH2—COOH does not give this test. It does not form silver with Tollens’ reagent. 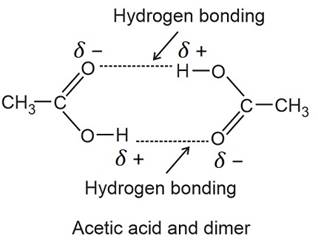