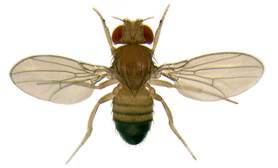 Thomas Hunt Morgan carried out several dihybrid crosses in Drosophila to study genes that were sex-linked. Morgan hybridised yellow-bodied, white-eyed females to brown-bodied, red-eyed males and intercrossed their F1 progeny. He observed that the two genes did not segregate independently of each other and the F2 ratio deviated very significantly from the 9:3:3:1 ratio. In the resulting progeny, the proportions of parental gene combinations were much higher than the non-parental type. Morgan attributed this due to the physical association or linkage of the two genes and coined the term linkage to describe this physical association of genes on a chromosome and the term recombination to describe the generation of non-parental gene combinations.


(b) Alfred Sturtevant (student of T.H. Morgan) used the frequency of recombination between gene pairs on the same chromosome as a measure of the distance between genes and ‘mapped’ their position on the chromosome. If the distance between two genes is large, they show higher frequency of crossing over and vice-versa. Today genetic maps are extensively used as a starting point in the sequencing of entire genomes.


(a) Central dogma was proposed by Francis Crick. It explains the flow of information from DNA to RNA and finally to trait expressing polypeptides (proteins).


An exception to the central dogma - The biggest revolution in the central dogma was the discovery of retroviruses, which transcribe RNA into DNA with the use of a special enzyme called reverse transcriptase produced by some viruses. The resulting flow of information was RNA → DNA → RNA → proteins. This was discovered by H. Temin and D. Baltimore.


Another exception is the discovery of Prions. The resulting flow of information is Protein → Protein. That is, proteins directly replicating themselves by making conformational changes in other proteins.


(b) Biochemical Characterisation of Transforming Principle:


Oswald Avery, Colin MacLeod and Maclyn McCarty (1933-44), worked to determine the biochemical nature of ‘transforming principle’ in Griffith's experiment. They purified proteins, DNA and RNA from the heat-killed S cells to see which ones could transform live R cells into S cells. They discovered that DNA alone from S bacteria caused the transformation of R bacteria. They also discovered that protein-digesting enzymes (proteases) and RNA-digesting enzymes (RNases) did not affect transformation, so the transforming substance was not a protein or RNA. Digestion with DNase did inhibit transformation, suggesting that the DNA caused the transformation. They concluded that DNA is the hereditary material.