(a) Write the name of the sub – atomic particle discovered by J. Chadwick. What type of charge occurs on this particle? In which part of an atom this particle is located?
(b) List three steps of an experiment performed by Rutherford for his model of an atom.

(d) Which scientist concluded that the size of the nucleus is very small as compared to the size of an atom?

a. James Chadwick discovered neutrons in 1932. Neutrons are neutral particles and they are found in the nucleus of an atom.

b. The three steps of Rutherford’s experiment for his model of an atom are- 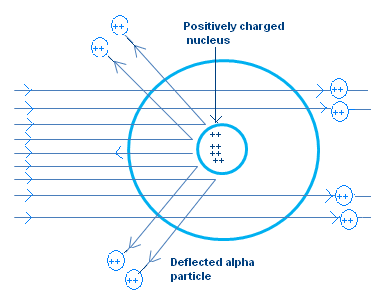 c.Isobars are the atoms of different elements having a different atomic number but a same mass number. Example- 18Ar40, 20Ca40


d.Rutherford through his gold foil experiment concluded that the size of the nucleus is very small as compared to the size of an atom.

How useful is this solution?We strive to provide quality solutions. Please rate us to serve you better.
PREVIOUSComplete the following table:
RELATED QUESTIONS :

give the number of neutrons in an atom of element

How can an α-particle be represented?

Does the nucleus contain neutrons also?

Mention the charge present on the nucleus of an atom.

Nucleus of an atom is positively charged and electrons around it are negatively charged. Then why do electrons not just fall to the nucleus out of attraction?

The correct electronic configuration of a chloride ion is:

The subatomic particle called electron was discovered by:

Describe the legacy of the French Revolution for the people of the world during the nineteenth and twentieth centuries.

Write down the concentration of each of the following solutions in g/L and mol/L.