(a) Write the mec

• Hydration of ethene to ethanol is basically an eletrophillic addition(addityionb of eletrophilic hydrogen) of water in presence of a catalyst which is usually an acid (non nucleophillic strong acid which gives up proton eg- phosphoric acid) to the double bond of ethene to synthesize ethanol as product .

• Also a high temperature (~170◦) is required to break the double bond of ethene as it is a reversible reaction .

The mecghanism of this hydration reaction goes through 3 consecutive steps :

• At first protonation of ethene takes place and a carbocation is formed by the electrophilic attack of the hydronium ion H3O+ which is formed during the interaction of acid and water. 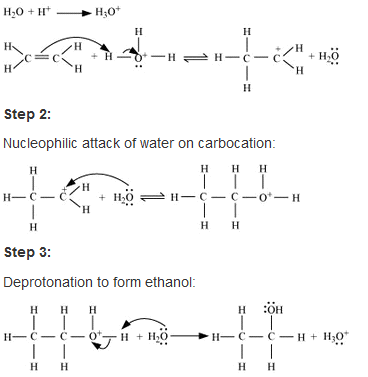 • The next two steps involve a nucleophilic attack of water (O) on the carbocation formed and then deprotonation of the intermediate cation to form the desired product respectivle.

• Then we have to treat the obtained propene with water under acid catalysis and water gets added to the double bond according to Markonikoff’s rule resulting in formation of propan-2-ol.

• Propanol can be converted to 1-propoxypropane by dehydration using conc. H2SO4 at 413K.

• When methoxymethane is treated with HI the products formed are methyl iodide alongside methanol which later results in mthyl iodide with water but only under certain conditions .

• The mechanism is as follows : 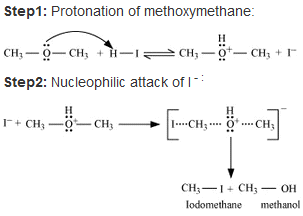 • At first step methoxymethane gets protonated by HI which is sufficiently acidic and forms oxonium ion.

• Which is followed by a nucleophilic attack of I- on the carbon atom as I- being a good nucleophile attacks the C atom and replaces the OH- from it by SN2 mechanism.

• If there is an excess of HI and the reaction being carried out at high temperatures then another 3rd step occurs; where the methanol formed reacts eith another molecule of HI and gets converted to methyl iodide.

• The given reaction is Kolbe reaction for phenols, when phenol is treated with sodium hydroxide phenoxide ion is formed and then it undergoes electrophilic aromatic substitution with even weak electrophile carbon dioxide and finally produces salicylic acid or ortho hydroxybenzoic acid. 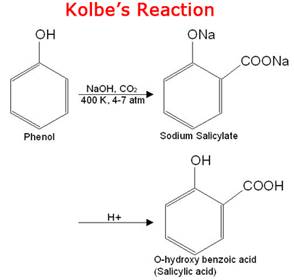 Hence here A is sodium phenoxide

and B is salicylic acid

• When ethanol reacts with Cu, at 573 k temperature, it gets dehydrated to (or oxidised) to ethanal.

• Hence A is ethanol and B is isopropyl alcohol or propan 2-ol.

• When phenetole undergoes reaction with conc. Nitric and sulphuric acid it gives a mixture of products

• This is an example of aromatic electrophilic substitution which forms ortho and para nitro-etghoxy benzenes as products.

Ethers can be pre

Explain why is O=