i. Cornea: The front surface of the eye is covered by a transparent spherical membrane called the cornea. Light enters the eye through cornea. It acts as a window that controls and focuses the entry of light into the eye. It also acts as a protective layer to the eye.


ii. Iris: The iris is a thin, circular structure in the eye, responsible for controlling the diameter and size of the pupil and thus the amount of light reaching the retina. Eye color is defined by that of the iris.


iii. Crystalline (Eye) lens: The eye lens is a convex lens made of a transparent jelly-like protein. The lens, by changing shape, change the focal distance of the eye so that it can focus on objects at various distances, thus allowing a sharp real image of the object of interest to be formed on the retina.


iv. Ciliary muscles: The ciliary muscles are a ring smooth muscle in the eyes middle layer that accommodates the focal length of the eye lens so that the eyes can see at various distances.


•The ciliary muscles regulate the flow of aqueous humor.


•It controls the accommodation of the eye lens.


•When a person is trying to see far away objects, the ciliary muscles relaxes itself so that the lens elongates. This elongation of lens increased the focal length of the eye lens & thus we are able to see objects placed very far.


•This is the reason why we are unable to see objects kept in room for a short time when we enter the room from outside. It takes a short time to accommodate the lens of eyes.


v. Retina: Retina acts as a screen of the eye. The purpose of the retina is to receive light that the lens has focused, convert the light into neural signals, and send these signals on to the brain for visual recognition.


•Low converging power of eye lens because of weak action of ciliary muscles. 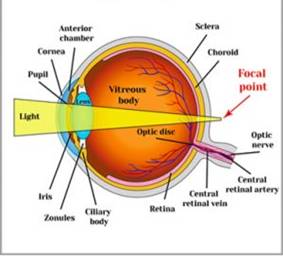 In this defect, the light rays coming from the object placed between near point & the point of least distance of distinct vision, after refraction from the eye lens converges to a point beyond the retina. This implies that the image is formed beyond the eye thus creating a blurry image. In such cases the focal length of the eye lens increases. So to bring the image on retina a double convex lens is used. The double convex lens converge the light rays coming from the object in front of the eye lens. In other words, the convex lens creates an image of the object at the near point . Now this image acts as an object for the eye lens and thus forming image on the retina.

How useful is this solution?We strive to provide quality solutions. Please rate us to serve you better.
PREVIOUSAn old man cannotNEXTGive reasons for
Related Videos

A person having s