To find out the phenotypic ratio of a dihybrid cross, we can take an example for the same: 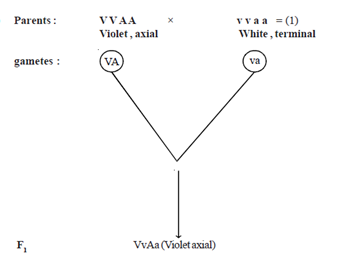 In the F1 progeny, all flowers show violet flowers which are axial.

Thus all the offspring in F1 are AaVv i.e. all are violet and axial. Law of Segregation: This law states that the alleles do not show any blending and both the characters are recovered as such in the F2 generation even though one isn't visible in the F1 progeny. It also states that the factors or alleles of a pair would segregate from each other such that each gamete receives only one of the two factors.

a) In the Galapagos Islands, Darwin observed small black birds which were later called Darwin’s Finches. He could see how there were many varieties of finches which had developed or evolved in the same island. The original seed-eating features were there along with many other forms with altered beaks. These different types of beaks had arisen to help them become insectivorous. This process of evolution of different species in a given area starting from a starting point and radiating to other areas is called adaptive radiation which was seen in Darwin’s finches.

b) Darwin's view on evolution differed from de-Vries in the following way:

• Vries concluded that mutation was responsible for evolution and not the minor heritable variations that Darwin suggested.

• Evolution for Darwin's theory was gradual while for deVries theory of mutation, evolution caused speciation and hence was called saltation which is a single step large mutation.