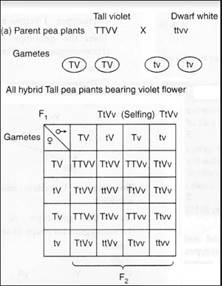 b) When the parent contains 2 alleles during gamete formation and the factor segregate from each other and do not blend such that a gamete receives only one of the two factors is known as the law of segregation. It is a universally accepted law.

a) The gases present in the closed flask were: Methane, carbon dioxide, ammonia and hydrogen.

b) The flask was fitted with electrodes so as to generate electric charge to provide high temperature upto 800 degrees Celsius.

c) The significance of the observation made was that it helped us formulate the hypothesis that life could have evolved from non-living organic molecules which would have been giant molecules. This is what we know as the theory of biogenesis.