a) DNA is a hydrophilic molecule which means that it cannot pass through cell membranes because cell membranes are made of lipid bilayer which is amphipathic so to force bacteria to take up the plasmid (genetic structure capable of replicating independently of the chromosomes), the bacterial cells are made ‘competent’ to take up DNA.

This can be done by treating DNA with a specific concentration of a divalent cation like calcium that increases the efficiency of DNA entering the bacterium through pores in its cell wall. Then recombinant DNA can be forced into such cells by incubating it with the recombinant DNA on ice, followed by placing those for a shorter period of time at high temperature and then again exposing them to ice.

b) The method by which an alien DNA can be made to enter i) plant cell is biolistics or gene gun method where cells are bombarded with high velocity micro-particles of gold or tungsten which are coated with DNA.

The method by which an alien DNA can be made to enter ii) animal cell is micro-injection where the recombinant DNA is directly injected into the nucleus of an animal cell. < Gene gun 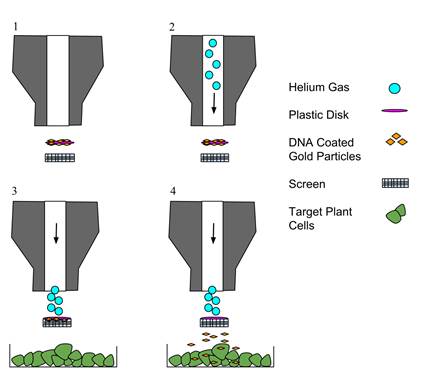