(a) Ozone depletion is reduction in the amount of ozone in the stratosphere. It gets depelted due to usage of high levels of chlorine and bromine compounds in the stratosphere, origin of which are chlorofluorocarbons (CFC), used as cooling substances in air conditioners and refrigerators, etc. As a result of depletion of the ozone layer, more ultraviolet (UV) radiation comes to Earth and causes damage to living organisms. UV radiation is responsible for skin cancer in humans and recues production of phytoplankton thus affecting other aquatic organisms. It also has an effect on the growth of terrestrial plants.

(b) Ozone depletion is a threat to mankind because it prevents most harmful wavelengths of ultraviolet light from passing through the Earth’s atmosphere which would otherwise lead to potentially harmful effects on living things on Earth. UV radiation is responsible for skin cancer in humans and recues production of phytoplankton thus affecting other aquatic organisms. It also has an effect on the growth of terrestrial plants.

Detritus is decomposed step by step by different agents and made available as nutrients to the plants in the following ways:

Dead plant remains and dead remains of animals make up the detritus, which is the raw material for decomposition. The steps in the process of decomposition are fragmentation, leaching, catabolism, humification and mineralisation.

a) Detritivores break down detritus into smaller particles by the process called fragmentation.

b) Water soluble inorganic nutrients move down into the soil horizon and get precipitated as unavailable salts by leaching.

d) Humification is when dark coloured amorphous substance called humus that is highly resistant to microbial action accumulates and undergoes decomposition at an extremely slow rate. It has a lot of nutrients.

e) The humus is further degraded by microbes and release inorganic nutrients by the process known as mineralisation making minerals and nutrients available to plants.

A diagrammatic explanation of the same is given below: 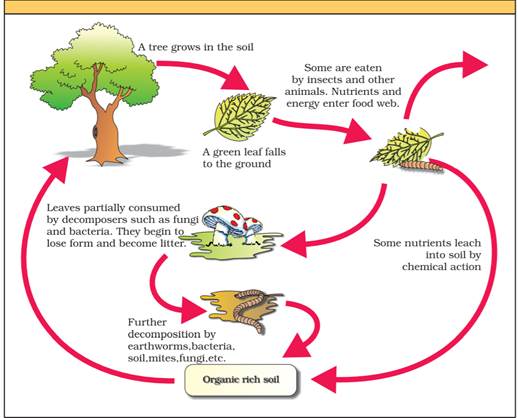 The number of tro

What could be the

Organisms at a hi

In relation to en

The rate of decom