(a) Why did Messe

(a) Messelson and Stahl use two different isotopes of nitrogen in their experiments because nitrogen is a major constituent of DNA. And also they are the most abundant isotope of nitrogen.

15N is not a radioactive isotope, and it can be separated from 14N based on densities. That is easily separated. 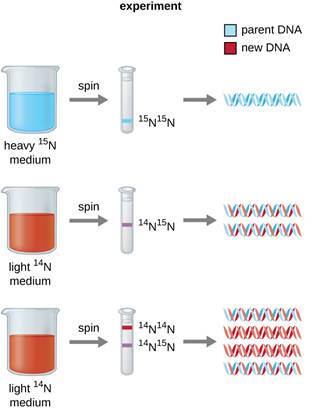 (b) They collected their samples of E. coli from the culture medium for testing at various definite time intervals as the cells multiplied.

E.coli is collected after 20 minutes as well as 40 minutes.

Because the DNA extracted after 20 minutes experiment had a hybrid density.

The DNA extracted after 40 minutes had equal amounts of hybrid and light densities.

(c) The importance of centrifugation in their experiments is to distinguish heavy DNA molecule from the normal DNA.

(d) The following conclusion was drawn at the end of the experiment:

Since E. coli divides every 20 minutes, the DNA extracted after 20 minutes experiment had a hybrid density.

The DNA extracted after 40 minutes had equal amounts of hybrid and light densities.

Monohybrid cross is a cross where two forms of a single traits are hybridised.

After undercrossing the hybrids of F1 generations, F2 progeny was obtained. In the monohybrid cross, Mendels selected pure line parents and they have one dominant and one recessive allele (this is finding the genotype of the parents).

Next emasculation (removal of stamens before the formation of pollen grains) is carried out.

This is followed by dusting, i.e., pollens from selected male flower are dusted on the stigma of an emasculated female flower.

The F1 progeny so obtained were all tall. The ratio of tall plants to dwarf plants in F2 generation is found to be 3:1. 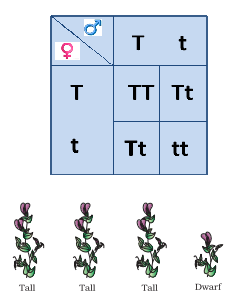 In this way these ratios are obtained.

(c) The two laws of inheritance Mendel derived from such a cross are as follows:

- Law of Dominance: In this the characters are controlled by discrete units called factors. Factors occur in pairs. And in dissimilar pairs of factors one member of the pair dominates the other.

This law is used to explain the expression of only one of the parental characters in a monohybrid cross in the F1 and the expression of both in the F2. This law also explains the proportion 3:1 obtained at F2.

- Law of segregation: Parents contains two alleles during gamete formation, the factors or alleles of a pair segregate from each other such that a gamete receives only one of the two factors.

A homozygous parent produces all gametes that are similar while a heterozygous one produces two kinds of gametes each having one allele with equal proportion.