(a) Why are thala

(a)Thalassemia and haemophilia both are determined by alteration or mutation in the single gene. Such disorders are characterized as Mendelian disorders.

Symptoms of Haemophilia – In this disease, a single protein that is a part of the cascade of proteins involved in clotting of blood is affected. Due to this, in an affected individual a simple cut will result in non-stop bleeding.

Symptoms of Thalassemia – This disorder results in excessive destruction of red blood cells due to which the affected individual has to get frequent blood transfusions.

Pattern of inheritance of Haemophilia and Thalassemia in Humans – Both are sex-linked recessive diseases. They are transmitted from unaffected carrier female to some of the male progeny. is the X-chromosome with haemophilic gene.

Translation is the process of polymerisation of amino acids to form a polypeptide. 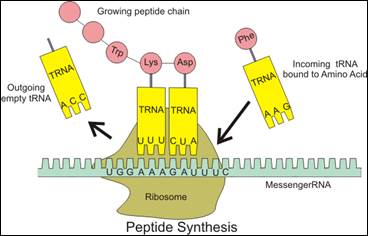 The process involves the following 3 steps:-

• tRNA gets charged when the amino acid binds to it using ATP.

• Initiation codon (AUG) present on mRNA is recognised by only the charged tRNA.

• Ribosome acts a site for translation. It contains two separate sites in a large subunit for the attachment of subsequent amino acids.

• The ribosome moves one codon downstream along with mRNA so as to leave the space for binding of another charged tRNA.

• The amino acid brought by tRNA gets linked with the previous amino acid through a peptide bond and this process continues to result in the formation of a polypeptide chain.

• When the ribosome reaches stop codon (UAG, VAA and UGA), the process gets terminated.

• The polypeptide chain is released and the ribosomes get detached from the mRNA.