(a) Carbon compounds are poor conductors of electricity as-

(ii)-as they form covalent compounds, ions are absent as they

Can’t dissociate into ions so they conductivity is poor.

(b) Cyclohexane is saturated compound in which carbon atoms are arranged in a ring.

The structure of cyclohexane is- 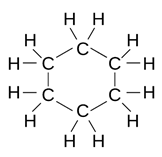 The number of single bonds is 18.

How useful is this solution?We strive to provide quality solutions. Please rate us to serve you better.
PREVIOUS2 mL of sodium hyNEXTName the hormones
Related Videos