(a) Why are colou

(a) Color blindness and thalassemia are categorised as Mendelian disorders because in these disorders single gene altered or mutated. Their mode of inheritance follows the principles of Mendelian genetics.

Mendelian disorders are transferred to offspring’s on the same liners too. They may be dominant or recessive.

The symptoms of thalassemia are as follows:

- growth problems – not putting on weight or growing in height.

- jaundice – yellowing of the skin and whites of the eyes i.e., pale coloration.

- swollen abdomen (tummy) – this is caused by an enlarged liver of spleen.

The symptoms of color blindness are as follows:

- Difficulty distinguishing between colors due to missing of single color receptive cones.

- Inability to see shades or tones of the same color

(b) Colour blindness is a genetic disorder i.e., X-linked recessive disorder and is caused by a recessive gene located on X-chromosome.

Females have two X chromosomes, so for a female to get color blindness, both the X chromosomes should be have mutant gene. This is not always possible.

This is because atleast one of the two X chromosomes can have normal gene gene for each type of cone. And as the male has just one X chromosome, so missing gene can lead to color Blindness.

Transcription is a process of transferring genetic information from one strand of DNA to RNA. It is done by formation of RNA over the template of DNA. In transcription complementary takes place, except that adenosine now form base pair with uracil instead of thymine.

In prokaryotes, the DNA-dependent RNA polymerase catalyses transcription of all types of RNA

Initiation: The RNA polymerase binds to the promoter. The Sigma factor recognises the promoter site and initiates transcription. The RNA polymerase uses nucleoside triphosphates as substrate for initiation and polymerises in a template depended fashion. This happens based on particular rule of complimentary. It facilitates the opening of the helix and promotes elongation.

Elongation: The activated ribonucleotides come to lie opposite to the template strand, complementarily & start pairing, and result in releasing of phosphate radical & energy. With the help of energy and Mg2* ions, the core enzyme bonds the adjacent nucleotides to form RNA chain. As the enzyme moves along the DNA, the RNA chain elongates till terminator region is reached. 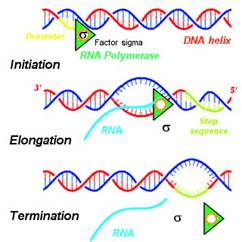 - In Eukaryotes the primary transcripts contains non-functional intron and exons. So it is subjected to splicing where introns are removed and exons are joined. This is followed by capping and tailing. In capping unusual nucleotide is attached to 5’-end of hnRNA. And in tailing, adenylate residues (are joined at 3'-end in a template independent manner. Now the hnRNA is fully developed and is known as mRNA. This mRNA is used for translation.