(a) Law of Dominance was based on the results of monohybrid cross (crossing plants with one contrasting characters).

● Example: If pure or homozygous tall plants (TT) are crossed with pure homozygous dwarf plant (tt), then we obtain all the plants in F1 generation (100%) as tall plants. 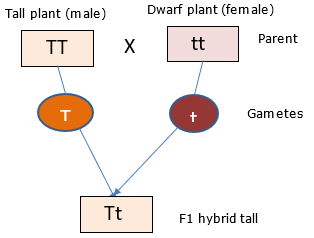 The appearance of all tall pants proves the law of dominance.

(b) Acquired traits are the changes in the body which are not passed onto the offspring because these do not cause any change in the DNA/Germplasm of the gametes/reproductive tissues.

The absence of tail in the mouse after surgical removal and low weight of a starving beetle cannot be passed on to the progeny as they are acquired traits and they do not cause any change in the DNA of germ cells. These changes occur in somatic tissues hence are not transmitted to their progeny. Whereas a rudimentary eye of Planaria is controlled by specific genes present in germ cells which can be transmitted from generation to generation.

How useful is this solution?We strive to provide quality solutions. Please rate us to serve you better.
PREVIOUS(a) Why is there NEXTDraw a ray diagra
Related Videos