(a) Population refers to a group of organisms that belong to a species and are living in a well-defined geographical area, sharing or competing for similar resources and potentially interbreeding. For example, Stray dogs of Delhi, living together in groups, interbreeding and competing with each other for food and water.

(b)The size of a population for any species is not a stable parameter. It keeps changing with time, depending upon various factors including food availability, predation pressure and adverse weather.
The population density of a region in a given period of time can fluctuate due to the following factors:

•Natality: It means the number of births during a given time period in the population that are added to the initial density.

•Mortality: It is the number of deaths in the population during a given period of time.

•Immigration: It is the number individuals of the same species that have come into the habitat from somewhere else during a time period.

•Emigration: It is the number of individuals of the population who left the habitat and gone elsewhere during the time period under consideration.

(a) Hydrarch Succession is a succession that occurs in wetter areas and the successional series progress from hydrich to the mesic conditions.

(b) The pioneer species are the species that invade a bare area.
A climax community is the final stage of succession, remaining relatively unchanged until destroyed by an event such as fire or human interference. 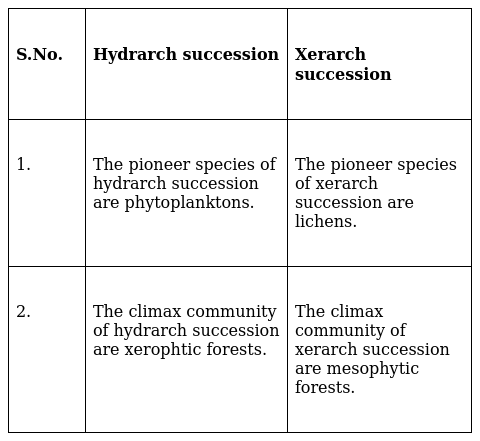 (c) The type of invading pioneer species depend in secondary hydrarch succession depends upon the following factors:

•Condition of the soil

•The seeds and propagules already present