(a) Using Gauss’s law, derive expression for intensity of electric field at any point near the infinitely long straight uniformly charged wire. 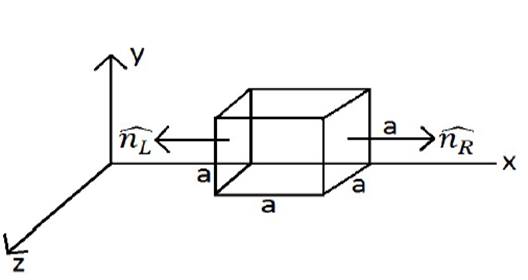 (a) Define electrostatic potential at a point. Write its SI unit.

Three charges q1, q2 and q3 are kept respectively at points A, B and C as shown in figures. Write the expression for electrostatic potential energy of the system.

(b) Depict the equipotential surfaces due to

(i) an electric dipole

According to Gauss’s law, the net electric flux through the closed surface is equal to 1/

times of the charge enclosed in the surface i.e.,

Let us consider the infinitely long wire carrying uniform charge. Now, we consider a hypothetical gaussian surface which is cylindrical in shape. The surface has radius r and length l and it placed coaxial with the current carrying wire as shown in the figure 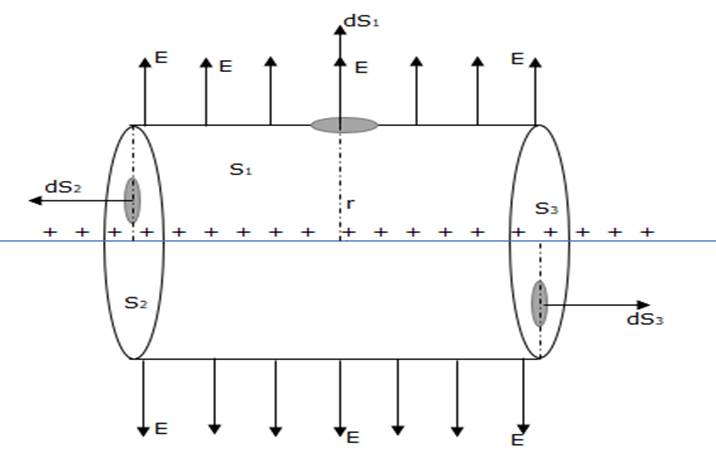 Electric field lines are parallel to the direction of normal to the surface S1 i.e. radially outward. For surfaces S2 and S3 the electric field makes right angle with the normal of the surface.

Now, let us consider small elements from each surface and then formulate it for whole gaussian surface.

By using to Gauss’s law

(i) Electric flux is the total number of electric field lines passing through the surface which is perpendicular to the electric field. According to gauss’s theorem, flux is

The electric field is present in only x- direction, hence flux is

for the faces of cube facing Y- axis and Z- axis

Now, the electric field from left face of cube facing negative X- direction is E= αa where α is 400N/Cm and a is the side of the cube. Flux through this side,

Electric field through the right side of the cube, E= α (2a)

Flux through the right side of the cube,

Net flux through the cube =

(ii) the charge within the cube

Electrostatic potential at any point, is defined as the amount of work done to bring the single test charge from infinity to that point.

It can also be defined as the difference in potential energy per unit charge between the two points in the presence of electric field. The S.I. unit of electric potential is volt (V) i.e. Joule per coulomb J/C

Similarly, the potential energy between q2 and q3 is given by

And the potential energy between q3 and q1 is given by

Hence, net electric potential energy is given by

(i) due to an electric dipole 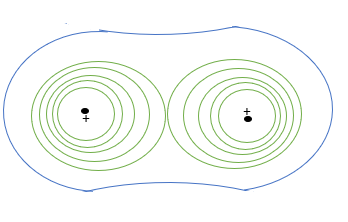 How useful is this solution?We strive to provide quality solutions. Please rate us to serve you better.
PREVIOUSSuggest an idea to convert a full wave bridge rectifier to a half wave rectifier by changing the connecting wire/s. Draw the diagram and explain your answer.NEXTIn the following diagram, the arm PQ of the rectangular conductor is moved from x= 0; outwards. The uniform magnetic field is perpendicular to the plane and extends from x = 0 to x = b and is zero for x >b. Only the arm PQ possesses substantial resistance ‘r’. Consider the situation when the arm PQ is pulled outwards from x = 0 to x = 2b, and is then moved back to x = 0 with constant speed ‘ѵ’. Obtain expressions for the (i) electric flux, (ii) the induced emf, (iii)the force necessary to pull the arm and (iv) the power dissipated as Joule heat. Sketch the variation of these quantities with distance.ORWrite working principle of cyclotron and with a suitable diagram explain its working. Give any two applications of cyclotron.
RELATED QUESTIONS :

A. Derive the expression for electric field at a point on the equatorial line of an electric dipole.

B. Depict the orientation of the dipole in (i) stable, (ii) unstable equilibrium in a uniform electric field. 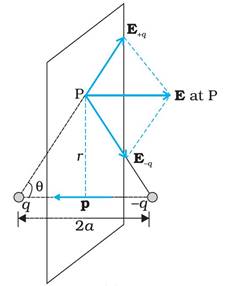 Two charges –q each are fixed separated by distance 2d. A third charge q of mass m placed at the mid-point is displaced slightly by x (x<<d) perpendicular to the line joining the two fixed charged as shown in Fig. 1.14. Show that q will perform simple harmonic oscillation of time period.

(a) Write down the electric dipole moment of this pair.

(b) Calculate the electric field at a point on the axis of the dipole 1.0 m away from the center.

(c) Calculate the electric field at a point on the perpendicular bisector of the dipole and 1.0 m sway from the center.

Three charges are arranged on the vertices of n equilateral triangle as shown in figure. Find the dipole moment of the combination.

An electric dipole is placed in an electric field generated by a point charge.

In increasing order of basic strength:

The electronic configuration of Cu(II) is 3d9 whereas that of Cu(I) is 3d10. Which of the following is correct?

Give an example of a relation. Which is

Symmetric but neither reflexive nor transitive.

(a) What is the distance between the two spheres? (b) What is the force on the second sphere due to the first?

An electrostatic field line is a continuous curve. That is, a field line cannot have sudden breaks. Why not?