A uniform rod of length L rests against a smooth roller as shown in figure (10-E9). Find the friction coefficient between the ground and the lower end if the minimum angle that the rod can make with the horizontal is θ.

The friction applied if the angle is minimum is

The length of the rod is given as L, kept at an angle of θ at a height of h

is the torque of the rod, F is the force in terms of tension, r is the length of the weight suspended at certain distance,

is the angular turning distance of the rod is rotated,

is the friction applied. 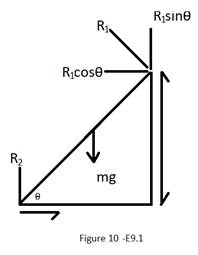 The vertical and the horizontal component of the reactionary forces

of the rod is

with the above equation (2) and placing

How useful is this solution?We strive to provide quality solutions. Please rate us to serve you better.
PREVIOUSThe door of an Amirah is 6 ft. high, 1.5 ft. wide and weighs 8 kg. The door is supported by two hinges situated at a distance of 1 ft. from the ends. If the magnitudes of the forces exerted by the hinges on the door are equal, find this magnitude.NEXTA uniform rod of mass 300 g and length 50 cm rotates at a uniform angular speed of 2 rad/s about an axis perpendicular to the rod through an end. Calculate (a) the angular momentum of the rod about the axis of rotation, (b) the speed of the centre of the rod and (c) its kinetic energy.
Related Videos

If the particle has a mass of 500 g, find the force (direction and magnitude) acting on the particle.

The door of an Amirah is 6 ft. high, 1.5 ft. wide and weighs 8 kg. The door is supported by two hinges situated at a distance of 1 ft. from the ends. If the magnitudes of the forces exerted by the hinges on the door are equal, find this magnitude.