The growth rings in the trunk of the tree are formed by cambial ring due to secondary growth.

Each ring contains early wood and late wood. Secondary growth occurs in dicot trees due to the activity of cambium which is a meristematic tissue.

By counting these rings, age of the tree can be determined. 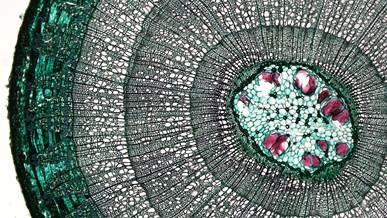 Give one basic fu

What is the fate

Trunks of some of

What is the comme