(a) (i) Line A depicts conformers. As conformers maintain a constant internal environment and change according to the ambient atmospheric conditions.

(ii) Line B depicts regulators. As the regulators maintain a constant internal environment despite changes in the environment

(b) Parasites are organisms which depend on other living organism called host for their food, they deprive the host of valuable nutrients. The different adaptations the parasites have evolved with, to be able to successfully complete their life cycles in their hosts are:

a. Degeneration or loss of unnecessary sensory organs – Many endoparasites undergo loss or simplification of unused organs or part in order to

i. reduce their size - Many parasites are large compared with their free-living relatives. This could be related to increased egg production.

ii. change their shape to match their hosts - Most parasites are dorso-ventrally flattened and this is related to the need to cling on to the host.

iii. No need of locomotor organs - As the adult parasites live for entire life in the body of the host, the locomotor-organs are not necessary for them.

v. Reduce the gut and absorb the nutrient through the whole body surface.

vi. Loss of food-tube – as with food tube the parasites becomes muscular.

b. Attainment of new organs – many parasites need new organs in order to

i. Enter the host easily - they secrete a liquid from unicellular gland to dissolve host tissue and thus making a microscopic passage for the parasite.

ii. Need new organs for attachment with the host – like hooks and/or suckers to cling to the host

d. Complex life cycle - The life cycles of parasites are often complex, involving one or two intermediate hosts or vectors to facilitate parasitisation of its primary host

The above diagram shows the pyramid of biomass in sea. 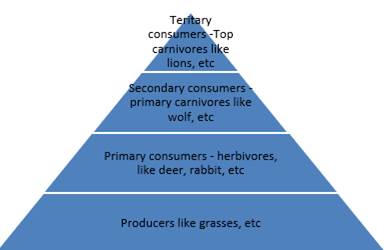 The above diagram shows the pyramid of biomass in a forest.

Inverted pyramids are those in which the base is narrower than the apex. It denotes that the biomass at the first tropic level or at producer level is lower as compared to the higher tropics like tertiary consumers.

Upright pyramids are those in which the base is broader than the apex. It denotes that that the biomass at the first tropic level or at producer level is much higher than as compared to the higher tropics like herbivores or carnivores.