i. The embryo sac has two ends – micropylar and chazal.

ii. At the micropylar end, there is egg apparatus which consists of three cells grouped together.

iv. At the chazal end, there are three cells which are called antipodals.

v. In the centre, there is a large central cell which has 2 polar nuclei.

vi. Thus, the embryo sac has 7 cells in total.

vii. Each cell of egg apparatus and antipodals have 1 nucleus and the central cell has 2 nuclei. So, the embryo sac has 6*1 + 2 = 8 nuclei.

viii. Hence, a typical angiosperm embryo sac, at maturity, is a 7-celled and 8-nucleate structure. 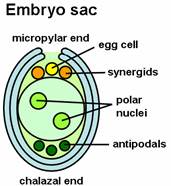 (b) Double fertilisation in Angiosperms – 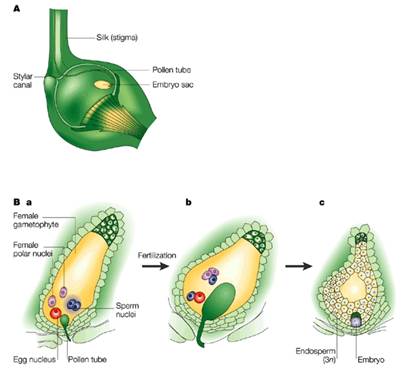 • The embryo sac has 2 synergids and 1 egg cell at the micropylar end, 3 antipodals at the chazal end and one central cell with 2 nuclei.

• The pollen tube enters the embryo sac from the micropylar end.

• Out of these 2 male gametes, one moves towards the egg cell and fuses with its nucleus. This completes syngamy and results in the formation of a diploid cell (2n), the zygote. The zygote further develops into an embryo.

• The other male gamete moves towards the two polar nuclei located in the central cell and fuses with them.

• This produces a triploid primary endosperm nucleus (PEN). Since this includes fusion of 3 haploid nuclei, therefore, it is called triple fusion.

• The central cell after triple fusion becomes the Primary Endosperm Cell (PEC) and develops into the endosperm.

• In this entire process, two types fusions i.e. syngamy and triple fusions occur in the embryo sac, the phenomenon is termed as double fertilisation. 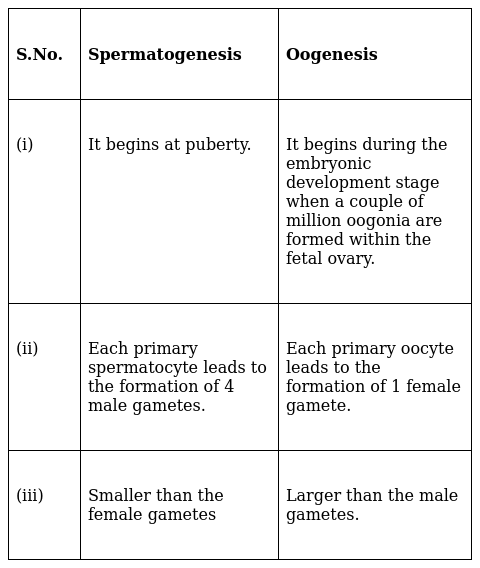 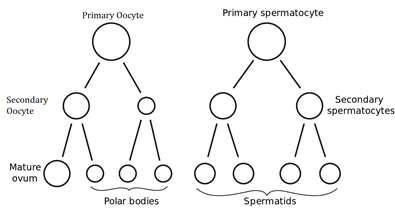 Role of LH and FSH during spermatogenesis –

LH and FSH are secreted by Gonadotropin Releasing Hormone (GnRH). LH acts at the Leydig cells and stimulates the synthesis and secretion of androgens (male sex hormones like testosterones).

These androgens stimulate the process of spermatogenesis.

FSH acts on the sertoli cells and stimulates secretion of some factors which help in spermatogenesis.

Role of LH and FSH during oogenesis –

In females, FSH stimulates development of egg cells, called ova, which develop in structures called follicles. LH also plays a role in the development of ova and induction of ovulation.