A tall cylinder is filled with viscous oil. A round pebble is dropped from the top with zero initial velocity. From the plot shown in Fig. 10.1, indicate the one that represents the velocity (v) of the pebble as a function of time (t).
A. 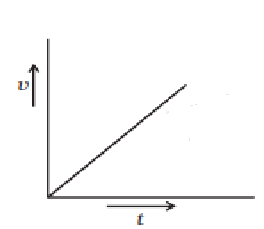 When a pebble is dropped in a fluid, a variable force called viscous force acts on it. This force increases the velocity of the pebble until it becomes constant. This constant velocity is called the critical velocity. Since, the force is variable, acceleration is variable and so v-t graph is curved and not a straight line to which critical velocity vc is an asymptote.

How useful is this solution?We strive to provide quality solutions. Please rate us to serve you better.
PREVIOUSThe angle of contact at the interface of water-glass is 0°, Ethyl alcohol-glass is 0°, Mercury-glass is 140° and Methyliodideglass is 30°. A glass capillary is put in a trough containing one of these four liquids. It is observed that the meniscus is convex. The liquid in the trough isNEXTFor a surface molecule
Related Videos

A tall cylinder is filled with viscous oil. A round pebble is dropped from the top with zero initial velocity. From the plot shown in Fig. 10.1, indicate the one that represents the velocity (v) of the pebble as a function of time (t).

Is viscosity a vector?

Water flows at a speed of 6 cm s-1 through a tube of radius 1 cm. Coefficient of viscosity of water at room temperature is 0.01 poise. Calculate the Reynolds number. It a steady flow?

What is the largest average velocity of blood flow in an artery of radius 2 × 10–3m if the flow must remain lanimar?

In Millikan’s oil drop experiment, what is the terminal speed of an uncharged drop of radius 2.0 × 10–5 m and density 1.2 × 103 kg m–3. Take the viscosity of air at the temperature of the experiment to be 1.8 × 10–5 Pa s. How much is the viscous force on the drop at that speed? Neglect buoyancy of the drop due to air.

Glycerine flows steadily through a horizontal tube of length 1.5 m and radius 1.0 cm. If the amount of glycerine collected per second at one end is 4.0 × 10–3 kg s–1, what is the pressure difference between the two ends of the tube? (Density of glycerine = 1.3 × 103 kg m–3 and viscosity of glycerine = 0.83 Pa s). [You may also like to check if the assumption of laminar flow in the tube is correct].

Fill in the blanks using the word(s) from the list appended with each statement:

(a) Surface tension of liquids generally . . . with temperatures (increases / decreases)

(d) For a fluid in a steady flow, the increase in flow speed at a constriction follows (conservation of mass / Bernoulli’s principle)

(e) For the model of a plane in a wind tunnel, turbulence occurs at a ... speed for turbulence for an actual plane (greater / smaller)