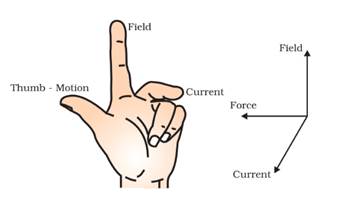 
(b) A motor is a device that converts electrical energy into mechanical energy.


The principal of Electric Motor: When a current carrying coil is placed in a magnetic field and current is passed through it, the coil experiences a force.


The direction of force is determined using Fleming’s left-hand rule. 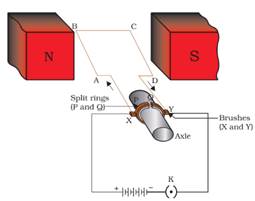 The coil ABCD is placed in between two magnetic poles in such way that the arms of the coil AB and CD are perpendicular to the direction of the magnetic field. As the coil draws current from the battery source, it experiences a force, determined using Fleming’s left-hand rule. The forces cause the coil to rotate continuously generating useful mechanical energy.


(c) (i)Armature: Armature is a mechanical component of an electric motor. The armature is supplied with the current and it experiences a force.


The function of the armature can mainly be described in the following ways:


(a)The armature is responsible for carrying the current across the magnetic field.

How useful is this solution?We strive to provide quality solutions. Please rate us to serve you better.
PREVIOUS(a) A student is NEXTA student added f
Related Videos

Fill in the follo