A square plate of mass 120 g and edge 5.0 cm rotates about one of the edges. If it has a uniform angular acceleration of 0.2 rad/s2, what torque acts on the plate?

The formula used is that of a torque which tells us the mechanics of force which helps the object to rotate. The formula is

F is the force applied on the object; r is the radius of the object turning. Turning angle is given by

, I is the moment of Inertia, L is the length at which the force is applied.

The moment of Inertia of the plate is known as

Hence, the torque produced by the plate is calculated as

How useful is this solution?We strive to provide quality solutions. Please rate us to serve you better.
PREVIOUSA rod of mass m and length L, lying horizontally, is free to rotate about a vertical axis through its centre, A horizontal force of constant magnitude F acts on the rod at a distance of L/4 from the centre. The force is always perpendicular to the rod. Find the angle rotated by the rod during the time t after the motion starts.NEXTCalculate the torque on the square plate of the previous problem if it rotates about a diagonal with the same angular acceleration.
Related Videos

Questions based on rotational motion44 mins

A door is hinged at one end and is free to rotate about a vertical axis (Fig. 7.10). Does its weight cause any torque about this axis? Give reason for your answer. 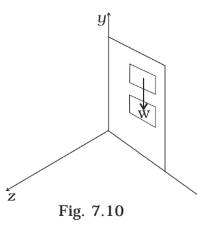 A wheel in uniform motion about an axis passing through its centre and perpendicular to its plane is considered to be in mechanical (translational plus rotational) equilibrium because no net external force or torque is required to sustain its motion. However, the particles that constitute the wheel do experience a centripetal acceleration directed towards the centre. How do you reconcile this fact with the wheel being in equilibrium? How would you set a half-wheel into uniform motion about an axis passing through the centre of mass of the wheel and perpendicular to its plane? Will you require external forces to sustain the motion?

A uniform sphere of mass m and radius R is placed on a rough horizontal surface (Fig. 7.9). The sphere is struck horizontally at a height h from the floor. Match the following:

A. h = R/2 (i) Sphere rolls without slipping with a constant velocity and no loss of energy.

Figure 7.5 shows a lamina in x-y plane. Two axes z and z′ pass perpendicular to its plane. A force F acts in the plane of lamina at point P as shown. Which of the following are true? (The point P is closer to z′-axis than the z-axis.) 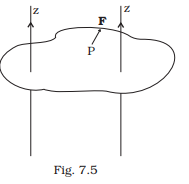 Figure 7.4 shows two identical particles 1 and 2, each of mass m, moving in opposite directions with same speed v along parallel lines. At a particular instant, r1 and r2 are their respective position vectors drawn from point A which is in the plane of the parallel lines. Choose the correct options: 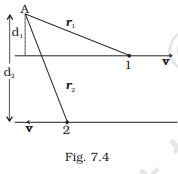 The net external torque on a system of particles about an axis is zero. Which of the following are compatible with it?

A simple pendulum of length l is pulled aside to make an angle θ with the vertical. Find the magnitude torque of the weight w of the bob about the point of suspension. When is the torque zero?

A uniform cube of mass m and side a is placed on a frictionless horizontal surface. A vertical force F is applied to the edge as shown in Fig. 7.8. Match the following (most appropriate choice):

A body is in translational equilibrium under the action of coplanar forces. If the torque of these forces is zero about a point, is it necessary that it will also be zero about any other point?

Identify the limiting reagent, if any, in the following reaction mixtures.

Dinitrogen and dihydrogen react with each other to produce ammonia according to the following chemical equation:

(ii) Will any of the two reactants remain unreacted?

(iii) If yes, which one and what would be its mass?

The hypotenuse of a right-angled triangle has its ends at the points (1, 3) and (–4, 1). Find an equation of the legs (perpendicular sides) of the triangle.

The following data are obtained when dinitrogen and dioxygen react together to form different compounds:

(a) Which law of chemical combination is obeyed by the above experimental data?

Fill in the blanks in the following conversions: